I turned 50 this week.   Inevitably, I got a bit mushy and nostalgic with a few friends and, as usual with a group of people of my age, the conversation led to discussions about children’s television (it was better in the seventies) and the sweets we used to eat, bought with the pocket money we’d saved.   Actually, during the week for me, sweets were rationed.  After lunch at prep school, we would line up and choose two boiled sweets each from a large jar as we left the dining hall.   For the record, I almost always chose lemon sherbets.

And they’d be my number 1 sweet to take to my desert island.   I would buy them during the holidays from a shop in Cirencester that weighed them out in quarter pounds.   They used to stick to the paper bag so I ended up getting a mouthful of paper as well as the boiled sweet.  The trick would be to suck on the end of the sweet really, really hard to extract the sherbet.   Delicious.

Number 2 would be wine gums.   Bought by mum and dad to have in the car on a long journey.   Although generations of children have been convinced otherwise, wine gums have never actually contained wine. British company Maynard’s claims to have invented them in the early 1900s, when Charles Gordon Maynard decided to create a sweet that would appeal specifically to adults, but not upset his teetotal father.

Number 3…  Violet Crumbles.   My mum’s favourite sweet when she was growing up in Australia and a rare gift from visiting relatives.   For the uninitiated, it’s a bit like a Crunchie, but the honeycomb shatters rather than crumbles.   I discovered last year that you can also buy them in Hong Kong.

Number 4..  Polos.   Only the mint ones though.   The fruit flavoured ones were just silly.  If you wanted a fruit flavoured sweet then you were better off buying Spangles.   The Polo mint first went on sale in Britain in 1948. According to Nestlé, who now own the brand, the sweet was intended to be launched in 1939, but the outbreak of war delayed it for nearly a decade. Supposedly, each Polo is shaped under immense pressure – equivalent to two elephants jumping on it.

Number 5…  Life Savers.   Always packed in my mum’s suitacse when she returned from a business trip to the USA.  (Along with copious supplies of Aunt Jemima’s pancake batter mix, but that’s another story.)    I loved the exotic flavours – R-OO-t Beer, Cl-O-Ve, Vi-O-Let, Lic-O-Rice and Cinn-O-Mon.

Number 6…   Sherbet Fountains.   Didn’t much like the licorice straw, through which you were meant to suck the sherbet powder.   Instead I opened up the paper package and emptied the contents directly into my mouth – and on to the carpet.

Number 7…  Opal Fruits.    And let’s be clear; they may have been called Starburst in the USA before the late Nineties, but in the Seventies, in the UK, they were definitely Opel Fruits and so will always remain so to me.   “Made to make your mouth water.”   And they did. 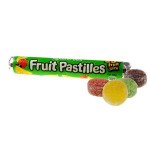 Number 8…   Rowntrees Fruit Pastilles.   The challenge was to suck the sugar coating off withouit actually chewing them.   I never, ever succeeded.   Usually bought in a tube, but on special occasions, such as the liong drive from Stroud to Chichester every summer holiday, bought in a large family size bag – when the pastilles took on the shapes of the fruits whose flavours they contained. 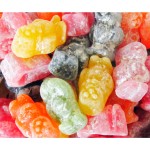 Number 9…  Jelly babies.   You always bit the head off first.   Now, I’ve been doing my research.   Jelly Babies were first launched by British sweetmakers’ Bassett’s as “Peace Babies” in 1918, to commemorate the end of the First World War, and were re-launched with a new name in the 1950s. Fans of the Beatles used to apparently pelt the band with them, after it was revealed that they were a favourite snack of George Harrison.

Number 10…  Refreshers.   Another sherbet sweet.   And I mean the Barrett’s ones, not the chewy things that Swizzels in Matlock produce.   I’m told that Barrett’s have been bought out now, but the name remains.