Lesson for self. If you buy new insoles for your shoes, it might be sensible to loosen your laces. Halfway through today’s walk, I did just that and, magically, any pain I was experiencing just disappeared. 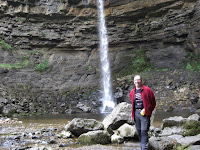 The walk itself was a real mixture of terrain today. It started with a visit to Hardraw and its 96ft waterfall. To get to it, I had to go through the ‘parlour bar’ of the Green Dragon pub and pay £2.00. It was worthwhile. England’s highest waterfall didn’t disappoint. A brilliant straight drop into a beautiful rocky pool. And I was able to enjoy it alone for a few minutes before a group of tourists noisily arrived and I decided it was time to move on.

The rest of the morning was taken up with the six mile slog up Great Shunner Fell, a climb of over 1500 feet. It wasn’t difficult, but it did seem unending with many false summits. The ground underfoot was boggy, but the pathway was flagged virtually the whole way up. I was followed all the way by a couple with two dogs, who kept about 200m behind me. Occasionally I heard the odd laugh or a call to the dogs, but otherwise I felt quite alone. 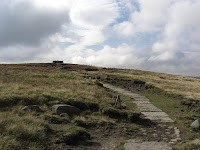 At the summit I stopped for lunch. (Sandwich filled with Wensleydale cheese and pickle, of course!). My followers caught me up, along with another party and a group coming from the opposite direction. Quite a party.

I left everyone to head over the moors down to Thwaite. Going down began to make my feet hurt, but stupidly I didn’t think to loosen the laces until later, so actually ended up having a less than pleasant descent.

I arrived at Thwaite wondering whether I should give up for the day. But after a cup of tea at the Kearton tea rooms, sitting outside with a robin perched on the table inn front of me, literally within reach, I had the brainwave of giving my feet a bit less pressure. Instant results. 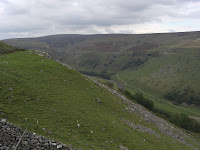 The last part of today’s walk should have been a relatively easy hop round the edge of Kisdon Hill to Keld. There was a bit of a climb (about 500ft) and then the path followed the contour of the hill along the side of the valley with the River Swale below. Unfortunately at one point early on I took the wrong path and found myself losing all the height I’d worked hard to achieve. I climbed straight up the hill to find a wall barring my way, so had to backtrack to find a hole in the wall. Luckily, fairly soon I found a man repairing a part of the wall and he allowed me to climb over there and rejoin the right path. (As long as you don’t sue me if you fall over, he warned)

The rest of the route to Keld was relatively straightforward, although at times I had to scramble over rocks which, if it had been wet, could have been pretty treachorous. A slow descent through bracken and then a lovely woody path led me to the tiny village of Keld. I phoned the landlady at the Tan Hill Inn and she drove down to collect me. I was glad she did. I don’t think I could have walked the final five miles up to the highest pub in Britain.

The weather forecast suggests that I might just get to Bowes tomorrow before it rains. We shall see!