From Tan Hill to Bowes

This walk has allowed me to experience a whole range of terrains and today was no exception. A relatively short yomp today – nine miles and over by lunchtime – but my first chance to have a go a real bog trotting. 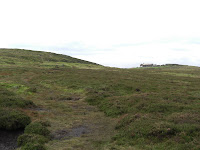 The route from Tan Hill took me over Sleightholme Moor, a really unattractive piece of ground – sodden peat, slimy and full of chances to fall over in the mud. It’s clearly part of the Pennine Way that is less well trodden. No flags to help, at least in the first parts of the walk, though once I had crossed into County Durham, the path was much better maintained.

As I reached Trough Heads and began to descent towards the pastures around Bowes, I decided that my feet really did need a rest. So, unless I make a miraculous recovery, I will treat tomorrow as a rest day and travel by bus from Bowes to Middleton. 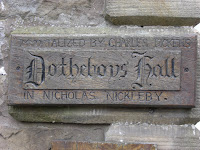 Bowes itself is pretty bleak. It is where Dickens researched the state of country ‘academies’ where children were mistreated and forced to labour in the fields, whilst proprietors took money from their often unwitting parents and guardians. My room for the night was at the Ancient Unicorn, where Dickens stayed, just a short walk along the high street from the original Dotheboys Hall – now converted into a series of family homes. Smike was nowhere to be seen.

My bag turned up rather later than on previous evenings – around 8.00pm. By that time I had dug into an excellent lamb shank and a superb cheese board, so I was surprisingly nice to the man in the van. This is a holiday, after all.