From Horton to Hawes 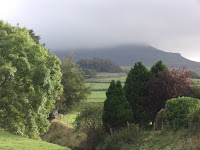 Breakfast at the sheep farm was simple. No choice of tea or coffee here. It was very strong Yorkshire tea or nothing. But it was quite good.

The Pen y ghent cafe was shut this morning so I had to stock up at the post office. Pork pie, crisps and a Mars bar. Not exactly a set of culinary jewels, but I was grateful for them later.

The walk today was pretty much an uphill slog during the morning, followed by a swift descent for a couple of miles at the end. Most of the fifteen miles were on old drovers’ roads which were stony and very uncomfortable underfoot. 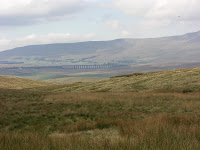 But the scenery was stunning. Pen y ghent was covered by cloud but the rest of the sky was fairly blue. I saw the Ribbleshead viaduct from a distance (though sadly no steam train – or any train – travelled over it. It’s shut for engineering works).

The moors were fairly windswept and bits of the way were being dug up by large mechanical diggers. So I imagined myself as both Heathcliff and Bob the Builder as I continued my climb. At one point I found a couple of party balloons, set free perhaps the day before from some gathering in the valley, caught in the gorse. I disentangled them and they sailed into the air. 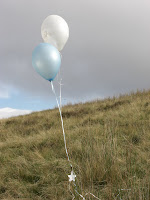 But the descent from Ten End to Hawes was grassy and almost Sound of Music like, even if I avoided doing much arm-stretched twirling as I was very concerned not to lose my footing.

My legs really began to ache for the last couple of miles and I fairly hobbled into Hawes. But, as I sit on my bed in the delightful, if predictably named, Herriots Hotel, the feet are feeling much better. And I nipped out earlier to buy some new insoles, so we’ll see if they make a difference tomorrow.

Now I just need to decide which pub to visit tonight for supper – and check what’s on the box later.