Back to school (and a brewery!) 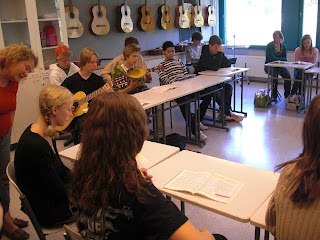 Olari Secondary School has 250 pre 16 pupils and 350 sixth form students. It’s in Espoo and was the school that had been chosen by the conference organisers for a group of us to visit.

If it is typical of schools in Finland, then it has much to teach those of us who are trying to improve educational achievement in the UK.

Firstly, it felt so much more relaxed than schools I normally visit – more like a junior university environment than a school. The children were in their own choice of clothes (though this was, of course, the teenage uniform of jeans, tee shirt and hoodies for both sexes.). At recess, they sat in the corridors, chatting, logging on to the web on their laptops and even strumming guitars.

Classes are small. Interestingly they are smaller for pre 16s than high schoolers. The children joked with and questioned their teachers as equals.

I was shown round the school by a young mathematician who had been in the UK last summer for the World Scout Jamboree, so we had plenty to talk about – He is proud of his school, has very high aspirations and loves learning, as well as being a keen Scout. His English was faultless, learned mainly, he said, from the TV – Finnish TV does not dub foreign language programmes as a matter of policy, ensuring that youngsters hear English all the time (and learn to speak in a mid-atlantic accent).

I left the school feeling very impressed – and frustrated that so few of our educational institutions feel the same.

We went on to visit Hartwall, Finland’s biggest brewer and bottler of soft drinks. Good CSR policies, helping to safeguard the reputation of a company that puts Pepsi branded vending machines into schools.

We finished the day at the National Science Centre for schools – a brilliant hands-on museum. A great place to meet fellow delegates and to pose for a photo sitting at an oversized kitchen table. My colleagues at work might think I behave like a big kid – today I could see the world from the perspective of one too.