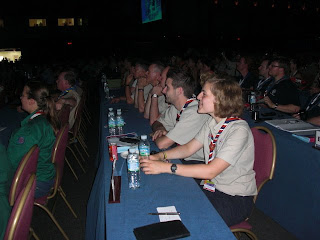 I have spent most of the day talking to people about what I would hope to do if elected to the World Scout Committee. This included a hustings session held in an area of the conference centre where the air conditioning was less than efficient. My shirt ended up sticking to me in a rather disgusting way. But I was told by one delegate that at least that showed that I am a real man whose passion for Scouting was obvious to all to see… Reassuring, I guess, if a little damp.

Earlier today we welcomed new member countries into the World Movement. It was genuinely a moving part of the day; particularly when Cambodia received their membership certificate.

An excellent opening ceremony this evening. Superb dancing and drumming from local performers. And the masters of ceremony were the local equivalent of Richard and Judy – reading thier autocues perfectly. Which was nice.

The evening finished with a walk back along the beach from the conference centre with Nigel and two of our younger delegates, followed by a swim and a drink in the bar. It’s a tough life.