The world begins to arrive 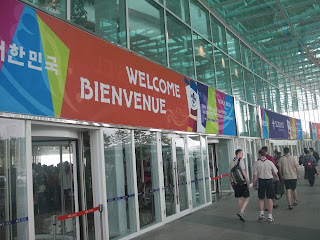 The nations of the world (or at least the Scout representatives of those nations!) are beginning to arrive on Jeju. I went up to the International Conference Centre with the rest of the UK team that had already arrived to register and saw a fair number of old friends.

Before that, however, I got up early to go out for a run. 5km. Very humid. Quite unlike any running I’ve ever done before. The route is hilly and quite testing, with a bit of running through sand on the beach – good for the muscles, but not necessarily a way to get a fast time! Derek is also running. He chose to go the opposite way round to me, so we met en route.

Everything here is very efficient. The shuttle buses run perfectly to time. The display boards were ready for delegations to put their exhibitions up at midday precisely – exactly as promised. The conference hall is decorated with enormous banners that at the time I visited were being stapled into precise positions. It is clear that this part of Asia means business.

I have just returned from a really pleasant evening spent with the rest of the delegation. The second wave arrived this afternoon and we are now just waiting for the two young delegates who are enjoying a special programme to fill the time between last week’s youth forum and the conference.