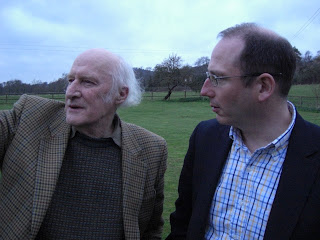 He looks just like his grandfather. Same height; maybe slightly broader shoulders; but the eyes and nose are distinctly those of a Baden-Powell. Today, Chris James, editor of Scouting Magazine and I travelled down to Surrey to talk to Lord Baden-Powell about his views on modern Scouting, in preparation for a forthcoming article comparing his views and mine.

We agreed about a great deal. The importance of young people taking control of decision making; the need for the World Movement to be more responsive to the needs of its member organisations; the challenges of bringing youngsters from differeing backgrounds together so that they better understand each other.

We disagreed about whether or not it is Scouting’s role to raise young people’s aspirations. I think it is. He’s not so sure. We explored ethnicity, multi-culturalism and the issue of cultural assimiliation. We talked about Scouting’s potential to reach the disenchanted and dispossessed. And we drank a lot of coffee.

Lord Baden-Powell is a fascinating man. He has some radical views about where Scouting should be going, now that his grandfather’s game has entered its second century. It will be interesting to see what finally ends up in Scouting Magazine.