A day in Göteborg 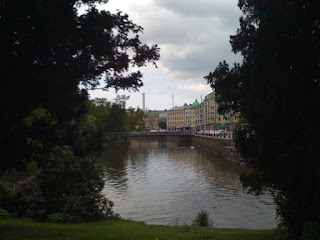 Stansted airport at 6:30am on a Friday morning is not the Stansted airport I know and love. I’m used to relative quiet, a sensible queue at Starbucks and a sea of people dressed pretty much the same way as me in dark suits, carrying laptopc ases and reading The Times (or if they’re very, very racy, The Guardian)

This morning was Redtop morning. Everyone was buying copies of the Mirror and the Sun. And they were all dressed in uniforms of tour shirts or fairy wings or cowboy hats (and one group sported all three). Friday morning at Stansted is, apparently, hen and stag morning. I took refuge in the cafe at the satellite terminal and prayed that none of them was on their way to Sweden. They weren’t.

I haven’t flown Ryanair for some time. There is little to say. They are very cheap. They play advertisements to you on the PA system during the flight. Their seats are blue and yellow. They arrived on time. They are not the spawn of the Devil, as some people would have you believe. But they are not the epitome of charm and good customer service either.

There is very little that is not to like about Göteborg. It is strikingly beautiful, with wide streets and loads of parks. It has a great transport system. (The bus from the airport dropped me opposite my hotel; the tram to the Marathon Race HQ went from the same place…) The people are friendly and speak English better than many of my friends in London.

I have just picked up my race number for tomorrow’s race. I’m then going to explore more of this lovely city. And probably eat more salt licorice than I should.