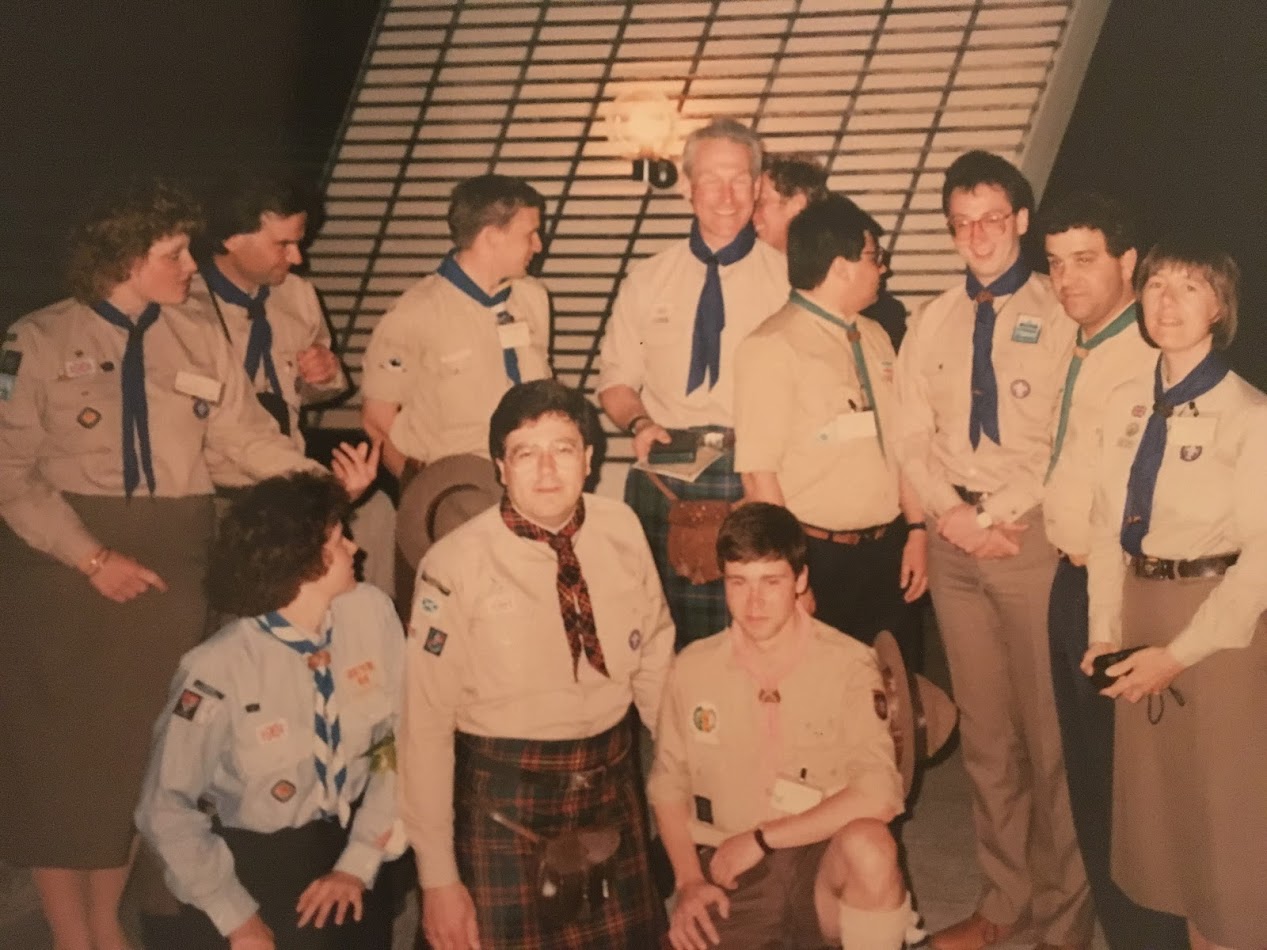 UK Scouting is celebrating YouShape month at the moment.  Youth Shaped Scouting takes place all year round – indeed it’s at the very heart of what Scouting is about.   Baden-Powell was fond of saying “Ask the boy”, to remind adults of the importance of what educationalists might call the “subsidiarity principle”.   (If he were alive today, in recognition of coeducation, I’m sure he’d say, “Ask the young people”…)     The Scout Association is focusing on February to support young people and volunteers in embedding this traditional part of Scouting within what they do, and is celebrating the amazing examples of Youth Shaped Scouting already taking place around the country.

So, for this blog post, I thought I’d reflect on the Youth Shaped Scouting I experienced as a young person, because it has given me so, so much…

35 years ago, I was an eighteen year old Cub Scout Leader in Bristol, working with children in one of the most challenging parts of the city – and loving it.  Some amazing adults had taken a risk and allowed me to run my own Cub Scout Pack, after a few months of learning the ropes as an Assistant in another Group.   Paul Neal and Margaret Causey, both Assistant District Commissioners, persuaded others to let me loose on the young people of St Paul’s and Easton.    Because of their trust (and active support) I took the Pack on camp to rural Gloucestershire where the Cubs helped to plan a programme that I remember even now.   Leroy saw the stars in the sky without any light pollution; shy and timid Harrison plucked up the courage to speak to people outside his immediate trusted circle when he went to collect bread from the village shop; Leon, who had never left Bristol before, met a cow for the first time – and steadfastedly refused to have milk on his cereal for the rest of the week. And I decided that I would become a teacher.   None of this would have happened without Paul and Margaret believing in me.

As a result of running that Cub Scout Pack, I got ‘discovered’ by staff at Baden-Powell House in London and invited to join the Association’s delegation to the British Youth Council.   A couple of years later, I was elected Chair of the delegation and became a member of the National Venture Scout Advisory Board – whose membership was half Commissioners and half young people.   It was run by three extraordinary and inspirational people, who were utterly committed to giving young people not just a voice, but a real stake in decision making. Their names were Jock Barr, then the Headquarters Commissioner for Venture Scouts, Mick Stocks, the Chair of the National Venture Scout Advisory Board and Derek Twine, the Director of Programme and Training at Gilwell Park – later to become CEO of The Scout Association and one of the most influential charity leaders in the country.

Jock, Mick and Derek helped me learn more about youth work than any degree course.  They mentored me; challenged me; argued with me; coached me; pushed me; encouraged me; knocked me down and helped me put myself back together again.   In short, they laid the foundations upon which I built the adult me. All three became close friends. Jock died just a few short years later, still himself a young man. Derek and Mick continue to inspire young people.

And then there was Garth Morrison.   When I was in my early twenties, I was invited to attend a national Scout and Guide Conference for County Commissioners.  I joined a small group of other twenty-somethings who were there to observe the conference and provide a ‘voice of young people’ perspective to the proceedings.   Today, it would be seen as a rather tokenistic approach to youth engagement, but at the time it was quite a daring thing for the establishment to have done.  During one working group session, I made the mistake of suggesting to the County Commissioner of Gloucestershire that perhaps his view that there were ‘no drug problems with young people in my county’ was somewhat misplaced.   Another Commissioner within the group told me immediately that young people like me should be seen and not heard.  He actually called me “laddie”.   He then decided to complain about me to the Chief Scout – Garth Morrison.

The following morning, I was told that Garth wanted to see me at breakfast.   I was obviously in trouble.   Big trouble.   “So, John,” he said to me, “I’ve been hearing some complaints about you.   Apparently you are putting forward your views on things quite forcefully.”    I swallowed and admitted that I had indeed not been backwards in coming forwards.    “Well, that’s very interesting, you see.  We’ll have to do something about that,” replied Garth.   “How would you feel about becoming The Scout Association’s International Commissioner?  We need young people like you to represent Scouting today.”

The rest, as they say, is history.   Garth’s confidence in me (backed up by Derek, Jock and Mick) impelled me into volunteering experiences that were truly life changing: work with UNICEF in Uganda; leading the UK contingent to the World Scout Jamboree; becoming a trustee of a major national charity.   And those volunteering experiences, in turn, had a major effect on my professional career.

This month is YouShape month.   We all deserve the opportunities to write our own stories and create our own destinies.   Good youth work is about empowerment.   Be like Margaret, Paul, Jock, Mick, Derek and Garth.    Have trust.  Take risks.   Believe in young people.