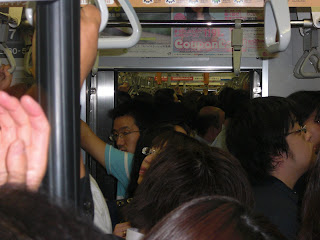 An early start found me heading back on the subway to the airport and from there on to Japan. Korea is a great place. The people are so polite. What other country would have a visitor’s last memory be the ground crew at the airport all bowing and then waving as the plane taxis away? Imagine that at Heathrow Terminal 5.

My first impressions of Tokyo are that the place is very, very big and very, very confusing. I managed to find the train to Shinagawa, where my hotel is located, without too much difficulty, but I think that this was more luck than judgment. Certainly, the subway map is no help. It is the most complicated train map I’ve ever seen. What makes things even more complicated is the fact that the train lines are independently owned and operated, so one can find oneself paying separate fares to transfer from one line to another. There may be a “one fare deal” available, but I haven’t yet found it. No integrated transport policy here, I fear.

The hotel itself, is a haven of calm in a very busy city. My room looks out on a Japaneze garden and, whilst I had been warned that rooms here would rival London or NYC for compactness, is actually the largest I’ve stayed in on this trip. No coffee making facilities though – well, the facilities are there in the form of a complicated water boiler which then keeps water hot all day, but there’s no coffee, only green tea. I am a Phillistine. I have been out to the 7-11 and bought instant coffee granules.

I braved the train at rush hour to go into Ginza – Tokyo’s equivalent of Bond Street and Knightsbridge. Plenty of high end brands. Very little Japanese atmosphere. I managed to find a bookstore where I purchased a bilingual guide book, which I think will prove useful. After a long bit of window shopping I returned back to the hotel exhausted. The temperature is over 30 degrees and very humid. Even the locals are complaining.

Dinner was in the hotel. But I decided to splash out on Tempura, which is very good here, I was informed by a Kiwi businessman who had chosen to bring his Japanese customers to dinner to close a deal. He was right. It was excellent. Even if his long and rambling discussions about golf with his colleagues on a neighbouring table were perhaps not the best accompaniment to the subtle flavours of my first meal in Japan