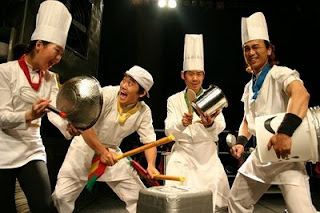 The show was not high quality drama, but it was enormous fun. There was a full house, made up mainly of Koreans but with a smattering of foreigners, including a party of Russian teenagers. The lights went down and we were treated to two hours of music making using kitchen implements, a large amount of slapstick comedy and a lot of twirling with sharp knives.

The plot: We’re in the kitchen of a large hotel. Three chefs are preparing a wedding feast against a 6’o clock deadline. The manager of the hotel displays an interesting pice of nepotism by introducing his rookie nephew as a fourth chef. Chaos and hilarity ensues. Er, that’s it really. The six year old sitting next to me was in stitches from the moment that lights went down. I could be cynical and write that the whole thing was rather beneath me, but I won’t. I laughed as much as my neighbour. We both particularly enjoyed the fart gags.