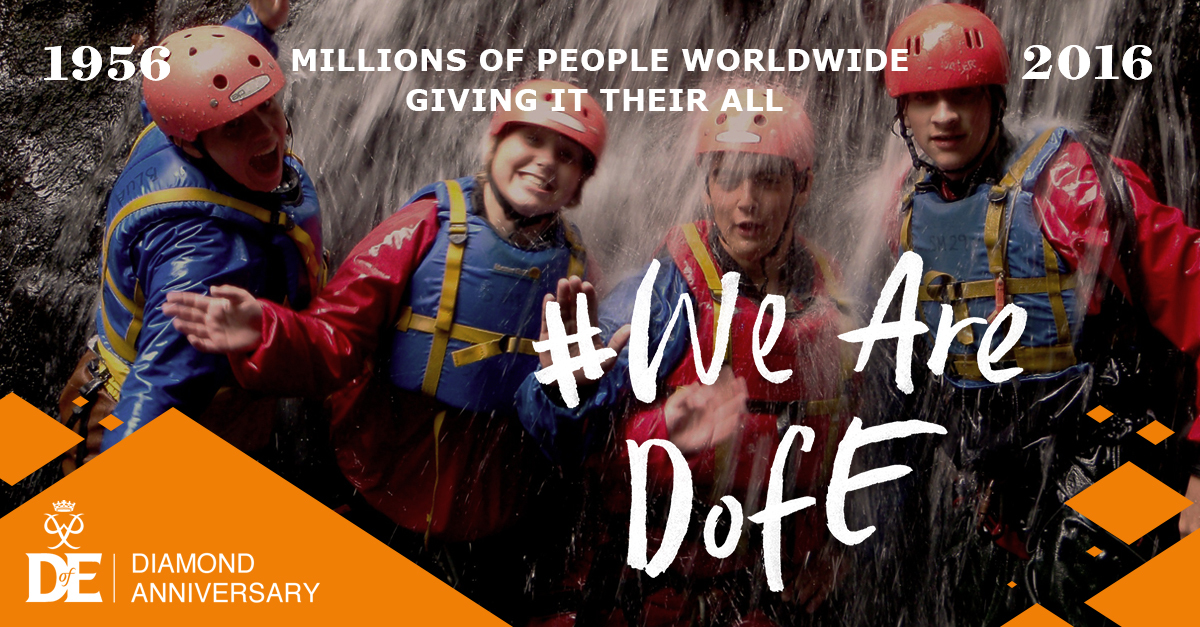 “There is more in you than you think”

Have you ever pushed yourself to your absolute limit? So far outside your comfort zone that you wondered if you’d ever be the same again? If you have, you’ll know how scary, exhilarating, rewarding, and, quite frankly, mind-blowing it can be.

Exactly what it is that takes you to that limit is different for everyone. For some people it might be climbing a mountain; for others it’s speaking to a room full of people from a stage; or taking up a new sport when you’ve always been the last one to be selected for the school team; or perhaps it’s the idea of volunteering to spend a couple of hours every week down at a local care home for the elderly. Every one of us can identify situations in which we’re uncomfortable.

But the rewards for deliberately making ourselves uncomfortable, for pushing ourselves that little bit further, can be enormous. Because it’s only when you challenge yourself to go to places that you’ve never been before that you really learn what you’re made of.

As a teenager, for me it was cross-country running.    I was pretty awful at games.   I have two left feet and no eye-to-hand coordination at all.    And, as a young child, I had asthma.   But at secondary school I decided to try to run.   It took a long time to build up my stamina and to push myself beyond the discomfort of the inevitable stitches in my chest, aching legs and wheezing in my lungs.    But I persevered and discovered that I actually enjoyed pushing myself to run further (though not necessarily faster) than I thought I could possibly go.   I still run today – and this year will, hopefully, complete my eighth marathon.

And Harriet, who has managed to overcome her fear of public speaking: “Before… I could not speak in front of people, but now I can speak without shivering, without crying.”

Harriet, Khurram and I have experienced the unshakeable confidence that comes from putting yourself in a new and scary place. And we know now that we could (and probably will) do it again.

Sixty years ago HRH The Duke of Edinburgh, husband of HM The Queen, Kurt Hahn, his former headmaster at Gordonstoun School, and Lord Hunt, who led the first successful expedition to summit Everest, created a great framework for this kind of challenge which is still changing lives today. You might know it: it’s The Duke of Edinburgh’s International Award. What you might be more surprised to hear is that it now has a presence in 141 countries and territories worldwide, and that more than 1.1 million young people like you are doing this Award right now.

Not many products are wearing so well after 60 years. In 1956, the year the Award was launched, computers were so large they took up a whole room, and the development of the internet was still decades away. Young men in the UK were required to complete national service, and young women could not get a mortgage to buy a house in their own name. And yet, the Award is even more popular now than it was back then, and there are young people carrying out activities such as computer programming, blogging, and micro-finance, that would have been impossible for the Award’s first participants.

So why has the Award become so popular around the world? It’s based on some great principles: firstly that not all learning happens in the classroom, and that as a young person you need every opportunity to learn outside your formal education; secondly, that you are the best person to decide what you need to do to challenge yourself and create new experiences; and finally that it’s really important to have a way of proving to others that you’ve tested yourself in this way.

The employment market today can be a tough. Many people are leaving schools and universities with great qualifications and grades, but find it really hard to get a job.  And getting into university isn’t easy either, with admissions tutors finding it increasingly hard to distinguish between really strong candidates.   Employers and universities tell us that it’s important to be able to demonstrate to them what makes you different from the other candidates. They’re looking for demonstrable skills in areas such as communication, teamwork and decision making.

The Award can help you when the time comes for applying for jobs and higher education.  It helps you develop those very skills that employers are looking for, and it demonstrates that very difference that universities admissions tutors want to see. For example, more than a quarter of UK companies look for the Award when reading applications, above any other recognition programme.

Here’s what Farhana, a Gold Award holder says, “Every interview and conference that I have been to, and every employer who I have worked for, has been aware of the Award and its outcomes. In fact, this was one of the most outstanding achievements which has played a great role in my career so far.”

Of course, there are other ways of demonstrating your extra-curricular achievements, but many of those are not consistently recognised around the world, in the way that the Award is. If you do your Award in any of the 141 countries and territories in which we operate, you’ll get a certificate which proves you’ve met the same standard that every other Award participant has had to meet. It’ll be branded with the Award’s international logo, meaning that there’s a very good chance that whoever is interviewing you will recognise it and understand what it means.

So the Award opens up opportunities to prove to yourself and others that “there is more in you than you think.” This phrase, adopted by Kurt Hahn, one of the Award’s founders, is at the heart of the Award.

As Albert, a Gold Award holder, says, “While you journey through the Award, you will encounter many priceless opportunities. Learn to take them, and use them to your full advantage.”   And yes, that happened to me too.  I used running for the physical recreation section of my Award at school – and eventually went on to achieve my Gold Award when I was at university, where my Award experiences had a major impact on my career plans and aspirations.

The Duke of Edinburgh’s International Award has helped millions of young people discover what they’re made of, and in turn to demonstrate this to others. Sign up for the Award today and experience more than you thought possible.