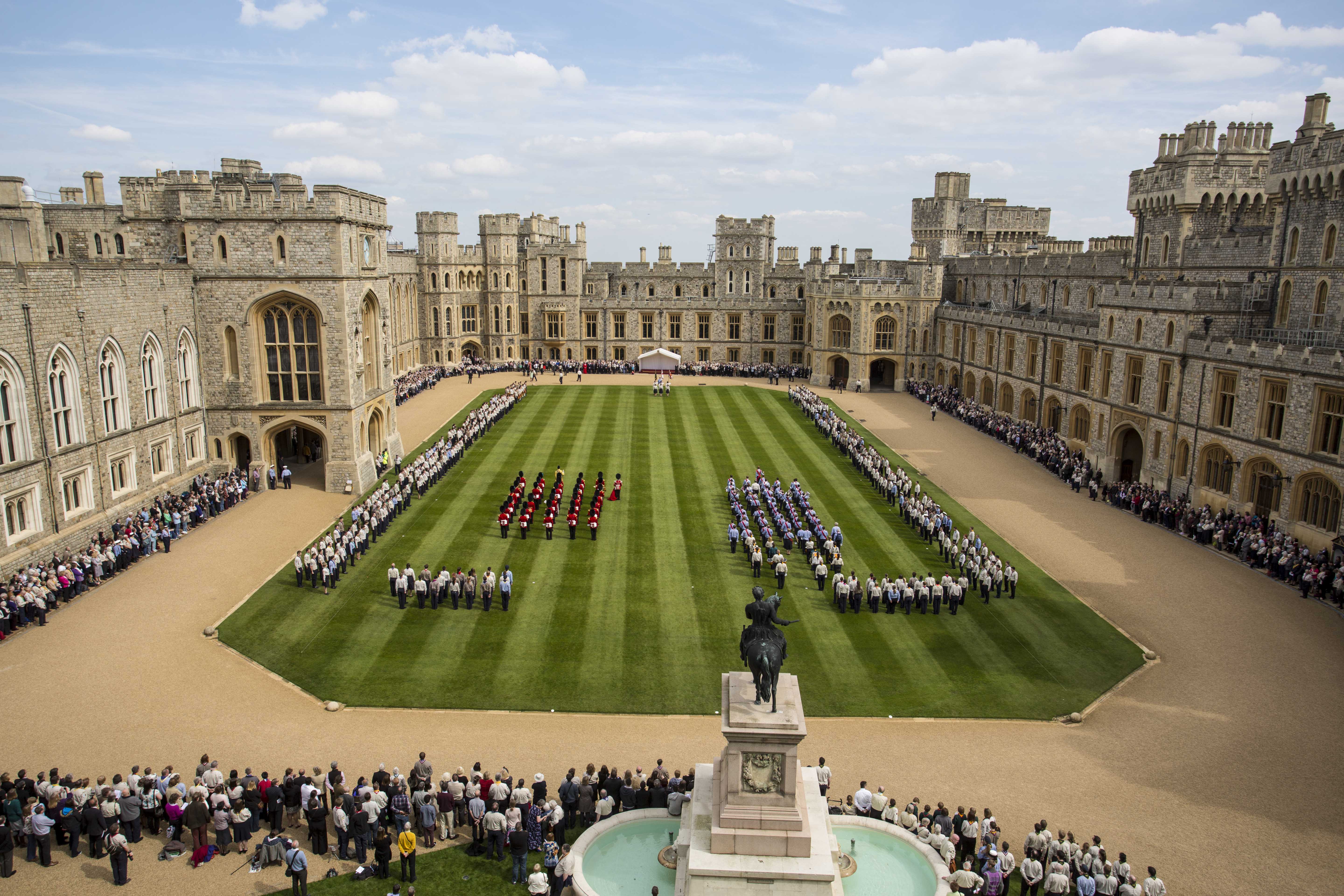 Today, the UK Scout Association held its annual Day of Celebration and Achievement.   The event dates back nearly 80 years and recognises the outstanding achievements of both adults and young people through a parade and service held annually within Windsor Castle by gift of Her Majesty the Queen.   In the morning, Queen’s Scouts form up in Victoria Barracks for a rehearsal, while adult award holders take part in a Mattins service in St George’s Chapel.

Around midday, the Quadrangle (a private area, known by many as HM The Queen’s ‘front lawn’) fills with approximately 2,000 award holders and guests. Here they take part in and view the National Scout Parade and review. The Queen’s Scouts then parade into the Quadrangle and the review takes place before the parade moves down to St George’s Chapel for the National Scout Service.

Additional guests join at the Lower Ward to watch the Parade and take part in the service as it is relayed over the PA system to the crowds outside. Finally, the Parade moves out of the castle and back to the Royal Mews.

In recognition of the close relationship that exists between The Duke of Edinburgh’s Award and Scouting, and because 2016 is the Award’s 60th anniversary, I was invited to give the address at the National Scout Service.    Here’s what I said:

Thank you so much for inviting me to speak to you at this wonderful celebration.    The theme of our service is journeying, so let me start by adding my congratulations to all the others you’ve received already, for reaching this point in your Scouting and life journey.   Today, you join an extraordinary roll call of the many, many, Queen’s and King’s Scouts who have come before you – and have sat in the same place in this wonderful building.   You have shown a commitment to personal growth, service to the community, leadership, of challenging yourself and of seeing a challenge through to the end.    Congratulations.  You’ve achieved an amazing thing.

Today’s day of celebration is one of a number this year to mark milestones in different journeys.  On Thursday evening, I was privileged to be with the Scouts of Oxfordshire when we lit a beacon to celebrate Her Majesty’s 90th birthday.   In June, HRH The Duke of Edinburgh will celebrate his 95th birthday.    And, as you may know, The Duke of Edinburgh’s Award is also marking a milestone year.    It’s 60 years since HRH founded the Award, together with his former headmaster, Kurt Hahn, and adventurer, John Hunt.  (And if you haven’t yet registered for the DofE’s Diamond Challenge, giving you the opportunity to take on a new adventure and raise money in the process to bring the Award to more young people, then there’s still time to do so.  Google it and register.   Right, shameless plug over.)

The Duke of Edinburgh’s Award is very proud of its association with Scouting, not just here in the UK, but in the other 140 countries, realms and territories around the world where the Award has a presence.  I can see that many of you proudly wear your own DofE Award on your uniform.   Peter Westgarth, the CEO of the Award in the UK is here as well this afternoon – and we both bring you the very best wishes and congratulations of the Founder.

Journeying and milestones.   That’s what I’d like to focus on for the next few minutes.  Achieving your Queen’s Scout Award is a milestone in a journey that may have started for some of you when you put on a turquoise sweatshirt for the first time and earned your very first badge…    For others of you, I guess the journey has been shorter; perhaps you joined Scouting later on.   But each of you will have your own memories of the challenges, frustrations, victories and achievements that have helped you to grow and equip you for life.

I was in the office of a ‘master of the universe’ the other day. Or at least that’s what we used to call people in the financial services industry. He’s responsible for the business of one of the world’s largest banks and we were talking about the milestone of getting your first job. “The problem is”, he said, these kids have brilliant qualifications, but they have absolutely no interpersonal skills. They can’t work in teams; they don’t relate well to customers; they can’t plan effectively.  If I have to read another application letter that tells me that a young person has wanted to be a merchant banker since she was eight years old – I will scream. I will genuinely scream.”

And then we talked, as he knew we would, about The Duke of Edinburgh’s International Award and about Scouting, because he had been a Scout.   How experiences, like the ones you’ve had, help you broaden your horizons.  And I won’t say there was a sudden epiphany. My friend, the master of the universe, didn’t suddenly spring from his chair and punch the air, screaming eureka at the top of his voice. But he did say that he would look much more closely at a candidate’s cv in the future. Because a description of the journey a young person has taken outside the classroom would tell him a great deal.

Let me share with you a simple story of a typical Scouting journey.  There was once a young Scout who pretty much wouldn’t say boo to a goose.   Let’s call him Johnnie.   He was pretty good at lessons at school, but when it came to sport and things outside the classroom he was useless.   He had two left feet and couldn’t kick a football.   He tried learning the guitar, but couldn’t develop the patience to practice.   But he did enjoy being a Scout.

One afternoon, Johnnie’s Patrol were sent on a practice expedition in the hills around where he lived.   Each member of the Patrol took turns in taking the lead and using the map and compass to navigate.   When it was Johnnie’s turn, he managed to get completely and utterly lost.   He knew that he was about to lose face in front of his friends.   He was close to tears.   His Patrol Leader recognized very quickly what had happened.   Instead of bawling Johnnie out, when no-one else was looking, he reached over and, very gently, oriented the map correctly, righted the compass and pointed at the proper place on the map.   And so Johnnie was able to lead the Patrol to the next checkpoint without any of his friends noticing the hideous, embarrassing, appalling mistake he had made.

And Johnnie has remembered his Patrol Leader’s little selfless act of leadership ever since.  It was an important milestone, probably for both of them.   I know, because I am, of course, Johnnie.   And I’m still pretty rubbish at map reading.

Now, you and I could draw any number of lessons from that milestone moment and apply them to life’s journey.  Getting back on track after getting lost.   The importance of having a great mentor.   The need to develop new skills, resilience, the right attitudes and positive behaviours.   Living out your Scout Promise.

For me, that afternoon taught me about true leadership, selflessness and compassion.   It confirmed in my 14-year-old mind why I loved Scouting.

I suspect that you will have similar memories.   Including that moment on day three of your qualifying expedition.  It was almost certainly pouring down with rain.   You were a wreck.   You wondered why on earth you were doing the thing at all.   That moment when you wanted to give up.

Well you didn’t.   That was another milestone.   And now you’re here.    And who knows what the next milestone will be.

My personal view is that life is both one long journey and a million interconnected ones.   Every moment is a milestone.   It marks the end of one journey and the beginning of another.   Every milestone is charged with opportunity, choice and potential.    Every milestone gives you the chance to confirm that you’re on the right course, or choose to take a different path.

You have, through your efforts, service, and friendship in Scouting, learnt the value and joy of generosity, thoughtfulness, determination, self-reliance, and resourcefulness – qualities that will stay with you forever, enhance your life journey, and enrich our world. Your families and friends should beam with pride, as they see in you the virtues in which Baden-Powell so earnestly believed.

Travel safely from milestone to milestone.  Keep your head up.  Live out your Promise.  Enjoy the journey.   And keep a look out for the other Scout who needs help sorting out their map and compass.”