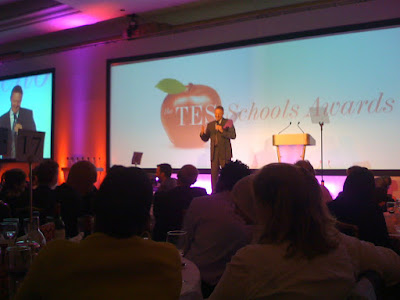 A chance today to catch up with a few old friends at the first ever TES Schools Awards. One of the finalists was Chadsmead Primary in Lichfield, where I started my teaching career. Lester Davies is still headteacher and he had travelled down to London with two of his staff to attend the ceremony. He was fairly surprised to see me when I accosted him during the drinks reception, but then even more surprised when he discovered that I was one of the judges. He was, however, kind enough to tell his colleagues that he always knew I’d go far…

Another friend at the event was John Dunford, General Secretary of the Association of School and College Leaders. He was delighted to have been asked to lend his glasses to Johnny Ball, who was making a speech on behalf of the charuty Jeans for Genes.
Anyway, a great lunch and a brilliant, speedy ceremony hosted by Rory Bremner. Vernon Croaker, the new Minister for Schools spoke briefly – saying that he was looking forward to meeting us all over the ‘coming period of time’. Good to be unspecific in the current political climate, Vernon.
Chadsmead didn’t win their category. We had chosen a rather brilliant school in Swindon instead. Disappointing for Lester and his team, but at least the TES Awards avoid any sniff of cronyism.