Seoul – the soul of Asia 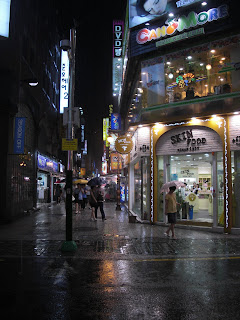 I left Jeju with a bit of a heavy heart. It’s a beautiful island and everyone has been so kind. Simon and his team really did organise a superb conference. Even at the airport we were carefully looked after and shepherded through formalities… In fact, it was all considerably easier than any early morning flight I’ve had to take in the UK.

Arrival at Seoul was easy too. I was expecting to find my own way into the city, but a Scout met me in the arrivals hall, disappeared to find the location of my hotel, marked it on a map and was then pointed me towards the (extremely efficient) subway system.

I arrived in Seoul city to discover torrential rain. The last 200 from the subway station to my hotel left me sopping wet. The rain continued all afternoon, but that didn’t stop me going out to sightsee – the trouble was that the rain was so hard that visibility was pretty much nil, so not a lot of sights got seen.

What I did realise, however, is that Koreans like to shop. The hotel is on the edge of a major shopping district and I have never seen so many people dodging in and out of expensive stores. I returned to the hotel for a brief rest and then went out again to look a little further afield. I glimpsed my first sight of the Seoul Tower (It had been hidden by cloud when I arrived.) It really is impressive and I hope to go to the top of it if the weather improves.

In the evening I returned to the shopping area (this time in the dry) and discovered that people like to wander out after dark. I spent a brilliant couple of hours window shopping, ate a large amount of street food and have returned to the hotel fairly exhausted. Tomorrow I am off to the DMZ on the border of North Korea. I have a feeling tomorrow’s blog will be a little more pensive in tone.