Scouting for the Google generation 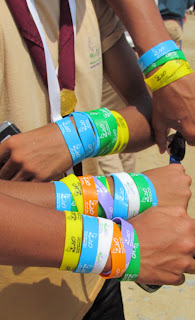 When Baden-Powell ran his experimental camp on BrownseaIsland, he did not realise that he was starting a movement.  But that’s what happened.   One boy told another about the fun that couldbe had by becoming a Scout.   Anothertold another.   The modest concepts ofgetting together with a group of your friends, having fun, getting involved inan adventure, doing good turns, were contagious.   And Scouting was born.

Messengers of Peaceis a worldwide undertaking, launched this week in Saudi Arabia, that propels that contagion into the 21stCentury.   Scouts from every nation wherethe movement is represented are being encouraged to register online theircommitment to do a good turn.   That goodturn might be helping to resolve conflict in a local community; it might be asmall act of volunteering that makes the world a better place; it might becreating a dialogue between different cultures, religions or generations; itmight be a major international service project.    Through the power of the web and socialnetworking, the registration of that good turn and the subsequent report onaction and impact becomes a little red dot on a Google map…   and that red dot becomes a story that can beclicked on by another Scout who is looking for inspiration and ideas.    Each little red dot connects with millionsof other little red dots, creating a digital mosaic that, for the first time inour Movement’s history, will allow a Scout in one country to appreciate thegood turn of another on the other side of the world – and truly appreciate the effectof being part of an extraordinary family of over 35 million brothers andsisters, sharing common values and aspirations.   Each little red dot turns a group of Scouts intoglobal Messengers of Peace.
And, thanks to the vision and kindness of HM King Abdullahof Saudi Arabia, those little red dots can multiply.    Mostgood turns don’t need money; they just need the inspiration of a group of Scoutsand a steadfast commitment to making things happen.   But if a good turn needs funding to turn itfrom a brilliant idea into real action, Scouts can apply over the next tenyears for a grant from a fund of $35 million that the King has generouslydonated.    So, those little red dots canbecome sustainable projects, impacting on communities over the long term,genuinely changing the world one young person at a time.
It’s not so different from what happened over one hundredyears ago, really.    Messengers of Peace is justScouting.   As breathtakingly simple andas jaw-droppingly impactful as it has ever been.    It’s just Scouting, but for the Googlegeneration.Scouts can register for Messengers of Peace at http://tinyurl.com/5vnuua6