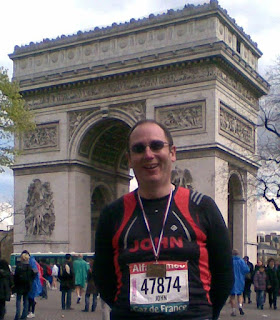 The headlines are pretty simple. I am the proud owner of a finisher’s medal and tee shirt for this year’s Paris Marathon, having achieved a personal best by scraping in at 4 hours 59 minutes. Or at least I think that’s my time. My Garmin tells me that’s the case, but I’ll have to wait for the finalised results from the computer to be certain. The course clock was registering 15 minutes more than that, but that was the length it took me to cross the starting line after the gun had gone off, so we’ll see.

It was a great course – fairly flat and lots of sights. The French take their running very seriously, so there were very few people in fancy dress and certainly no rhinos. Slightly bizarrely, there wasn’t just water every 5km, but a whole variety of fruit – bananas, oranges, dates and nuts. The official sign, warning runners of an oncoming ‘fuel’ station was a knife and fork. Very French.

The first 10k were relatively easy. Running down the Champs Elysees from the Arc de Triomphe is something that I guess I’ll never do again and has to go down as one of the world’s most iconic marathon starts. But the course continued past some pretty amazing landmarks, including the Place de la Bastille before heading into Vincennes and a pretty unexciting treck through the park there, on the East of the city. Then we turned and headed due West, reaching halfway just after leaving the park, and then revisited Bastille before running along the side of the Seine.

One part of the run, at about 30k, took us through a long underpass. It couldn’t have been a worse place to hit the ‘wall’, with no onlookers to cheer us on. Loads of people suffered really badly, falling over and getting cramp. I walked for about five minutes and was then able to carry on. As we left the underpass and climbed into the light, the cheering team from Get Kids Going, the charity for which I was running, waved their Union Jacks and screamed encouragement. Very welcome.

We soon passed the Eiffel Tower and then started a long slog further West before eventually entering the Bois de Boulogne for the last 5k. This was where we really needed a crowd to cheer us on, but the park was empty of spectators. Luckily I found a running partner from Scotland and we encouraged each other on until we turned the corner and saw the bottom of Avenue Foch.

And then, suddenly, it was all over. Someone cut the timing chip from my shoes. Someone else gave me a plastic poncho. A third person handed me my medal. And then I limped, smiling broadly, to the metro and home to the hotel and a hot bath.

It’s now snowing. Luckily we didn’t even get rained on during the race. I’m now going to brave the weather and go in search of a large plate of steak and frites. I think I’ve earned it.