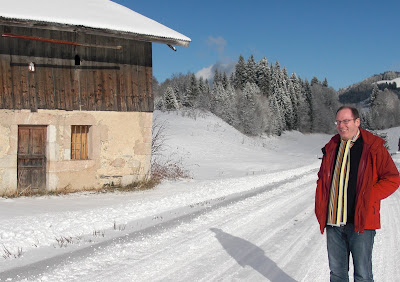 I see that there has been a ‘severe weather warning’ in Britain over the weekend, because it has snowed and there has been as much as two inches of the white and powdery stuff in places. Ha! That’s nothing, compared with the Haute Savoie on the border between France and Switzerland just outside Geneva.

I spent the weekend with friends, Dominique and Clara, at their beautiful mountain chalet, high in the hills. Dom used to be the Deputy Secretary General of the World Scout Movement. The snow began to fall on Friday evening and by Sunday morning, the ground was properly covered. It will, probably, stay that way until May.
I wasn’t in the area just to renew old friendships and to stamp in the snow, although it was wonderful to do both. I spent Saturday with staff colleagues at the World Scout Bureau, planning our work for the next three years and agreeing our priorities. It was an extremely productive day; we got to know each other better and began to understand our various strengths, areas of expertise and experience. This is going to sound a bit patronising, but I think they are an exceptionally talented bunch of people. I am really going to enjoy working with them.