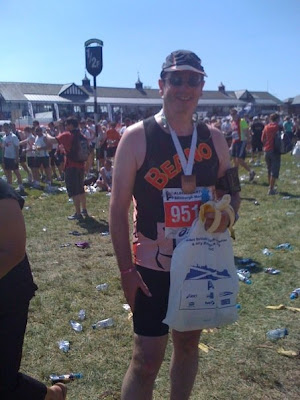 What should have been an excellent day was marred by two major issues. It was ridiculously hot. And the organisers mucked up the provision of water. So, I finished the race in 5hrs 5 mins rather than the 4:30 I had hoped for.

I have written the following note to the race director:
“Dear Neil
I’m not sure what happened today. My guess is that someone failed to order enough water, forgetting that on a hot day runners do tend to pick up double the number of bottles they should – one for the throat and one for the head… but I was very, very disappointed and slightly scared by the lack of provision, not just for fun runners, but for those of us who are the mainstays of club running – the veteran plodders.
The forecasters have been saying today was going to be scorcher for days. Running from the red pen, I was faced by an empty water station at the very first hydration point. From there on, whether there would be water or not became a lottery.
This is not a cheap race. Supplying enough water is an absolute must – and, frankly, pert of a race organiser’s duty of care to their participants. I had to walk once I reached 15 miles and realised I couldn’t count on there being any water available.
Suggestions for next year… Double the order of water if the weather even threatens to be as hot. Improve signage and organisation of water stations. Little things like 250m warning signs (rather than half mile ones); a consistent layout of tables with water first and then sports drinks, clearly labelled; marshalls briefed to remove caps from bottles; etc. If in doubt, refer to the brilliant organisers of larger evenst such as London, Paris or Berlin , where they’ve got this nailed.
That said, really friendly marshalls, who tried their very best in trying circumstances. I was particularly impressed by the Scout Group who were all so enthusiastic and helpful. The finish at the racetrack was great.
Lovely tee shirt. Smashing medal.
I know that you welcome honest and constructive feedback. I hope this will be useful.