Two sides (or more) of Tokyo 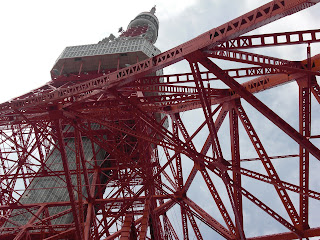 Suddenly, “Lost in Translation” makes sense. This is a very, very strange city. (But then, I guess London could appear pretty bizarre to a foreigner who dropped in for three days as well.)

I started the day with a 5k run and was delighted to discover that many local people do the same thing. Several joggers chose to use the opportunity to practise their English. I puffed and spluttered my replies. I am not sure that they completely understood me.

Breakfast was meant to be vegetable juice and coffee, bought at a local 7 – 11. The vegetable juice, however, turned out to be alcoholic. There’s nothing like starting the day with the local equivalent of a Bloody Mary – particularly is you’re teetotal.

A bus tour of the city took me up the Tokyo Tower, past the Royal Palace and to the Temple at Asakusa. Then a walk back to Ueno, through the park and then to Akihabara for a late lunch. What a bizarre place. Shop after shop of electronic goods, like Tottenham Court Road only fifty times bigger, mixed up with stores selling Manga comics, costumes and dolls. And then there were the Maid cafes – places where you can be served a drink by a beautiful young woman dressed as a maid, Alice in Wonderland or a schoolgirl. Very, very strange.

Back to the hotel for a rest and then out to Shibuya. More later