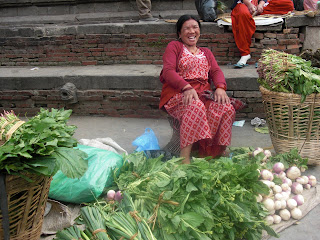 Flying into Kathmandu was absolutely amazing. I watched dawn break over Pakistan as we flew through a perfectly clear sky. Far below, I could see small villages. Gradually, the scenery changed and in the distance, right on the horizon, snow covered mountains appeared. They got closer and closer, but we didn’t actually fly over them. Instead we headed further south, but in the last twenty minutes of the flight, did cross the foothills of the Himalayas, close enough to the ground to be able to see people waving at the plane, before dropping down into the valley of Kathmandu.

The airport was busy, but far from the mad crushing mess that some guide books and web sites had led me to expect. I passed straight through passport control in seconds (compared with the hour it can sometimes take to enter the US) In the baggage reclaim hall were two Rover Scouts, looking for me to welcome me to their country. In front of the rest of the passengers from Doha (and with plenty of amusement), I was presented with a garland of marigolds to wear round my neck whilst I was waiting for my luggage. It was a long time coming – The ground staff also had to unload half the electrical products from the middle east which had been bought by the Nepalese workers who were returning home from the building sites of Qatar.

I think I had expected Kathmandu airport to be a bit like Delhi – with crowds of hawkers and taxi drivers outside the terminal building, competing for business. To be honest, it was more like Bristol. The car park was right outside and we walked across to a minbus which was to take us to the Nepalese Scout Head Office and then to our hotel. Everyone was very calm and very laid back. No one hassled us at all – although the drive through Kathmandu to the office was more familiarly Asian. Lots of horn honking, a relaxed attitude to which side of the road was the correct one – and a casual disregard for other road users.

Coffee at the Scout Headquarters was followed by a tour of the building and a visit to the Scout museum. By now, I was beginning to feel a bit sleepy, but tried not to show it. Then it was off to the hotel (on another perilous bus journey). My room is lovely. I seem to have been upgraded to a deluxe one, due to my celebrity status as a member of the World Scout Committee.

As I write this, I have just finished attending a meeting of the Asia Pacific Scout Committee… many familiar faces, including those of some old friends. I am now truly exhausted, so I will be going to bed early.

I think I’m in for an excellent week.