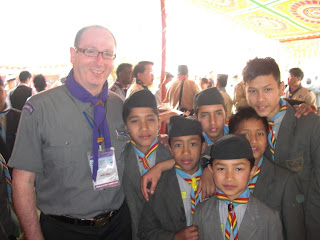 I woke at 2, 4 and then at 9:30; grabbed a quick breakfast and then joined the morning’s committee meeting – the cultures may be different, but the issues are the same – how to get better youth participation in decision making; how to reinvigorate training and support of adults; how to tell the story of what Scouting is achieving more effectively.

More delegates for the conference were arriving and there was quite a crowd by lunchtime. Lunch was held by the swimming pool (still too cold for swimming, so it looks a bit slimy) in beautiful sunshine. Plenty of different curries to try and those amazing sweet dumplings for pudding… I forget their name, but they were excellent.

I went for a brief walk after lunch around the area immediately outside the hotel. First impressions – clearly a tourist friendly area; very clean (I saw almost no litter); very smart shops; the usual chaotic driving that one expects in this part of the world; some street hawking, but mainly limited to sales of small toiletries and shoe shiners. The latter don’t see to operate the scam I experienced in Delhi of one of their mates firing sh*t at your shoes as you pass. Everyone – and I mean everyone – smiled at me.

I looked in on a seminar being held for Leaders responsible for marketing and PR in their associations. This included a series of prepared role plays of press conferences dealing with issues perceived to be ‘tricky stories’ to deal with. One example will give you a taste… One group had to face a press team who were asking how an uploaded video to YouTube had appeared of two Scouts at a fictional Jamboree, re-enacting one of the more intimate scenes from Breakback Mountain. The group included an Indian, a Bangladeshi and a Malaysian. Fascinating. (And very funny.)

Dinner was held with the Association of Top Scout Award Achievers – an informal group of people who have managed (when young people) to achieve the highest award of their Association. Lots of speeches (including one from me). An auction of Scouting memorabilia. And a great many photographs.

And, finally, I slipped off for a drink with the Australian and New Zealand delegations. (Well, the Australian gang and George, who is the sole NZ rep). Subjects for debate: The correct fillings for a Cornish Pastie; Clotted cream; the drunken antics of the officer class in the Australian army – including a game called Flight deck, which involves sliding a bewildered junior officer down a polished table in a first floor mess – and straight out of the window. Not something, of course, we’d do in the Scouts (initiation games having been long since banned) – but it would probably not be a good idea to let the Network in Islington hear about this in case they got some inappropriate inspiration…