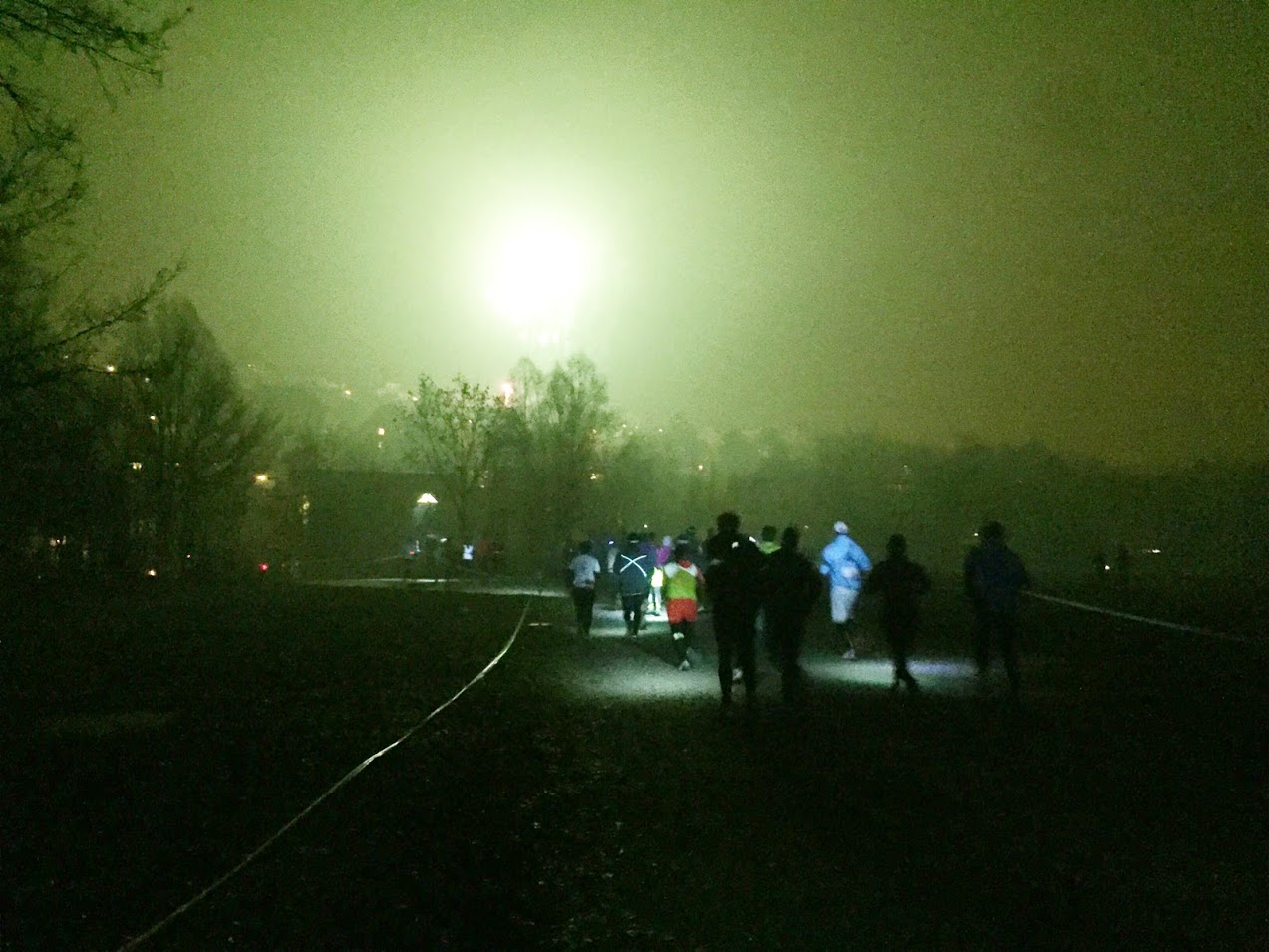 That’s the question most people have asked me since finding out that I was going to run a half marathon on New Year’s Eve.  In Zurich.  Starting at midnight.   In the dark.

Actually, it was enormous fun.

I flew out to Zurich on the afternoon of New Year’s Eve and arrived just as it was getting dark.  After checking into the amazing Hotel Schweizerhof – where I received a welcome that was fit for visiting royalty rather than a rather scruffy Brit with only a very small rucksack as his luggage – I went in search of something to eat.   Normally on a run day, I have a bowl of porridge for breakfast.  I chose sashimi and ubon soup as my pre-exercise meal (obviously) and then went back to the hotel for a rest before leaving for Race HQ.    It was now about 10:30 in the evening and central Zurich was filling up with well-dressed party goers.   Nevertheless, in the main station, I was able to spot the odd (very odd) lycra clad adventurer.   We gathered on the same platform and waited for the train that would take us the three stops needed to reach our destination – an industrial park on the outskirts of the city.   “Are you going where I think you’re going?” was the main question of the evening.   The answer, in English, German, French and Italian was, invariably, “yes”.    And the second question remained, of course, “why?”

The walk from the train station to the local sports centre that was Race HQ took about ten minutes.   The route wasn’t particularly well signposted, but following the line of folks all going in the same direction was pretty easy and good practice for the race itself.   Inside the sports centre there was a sort of party going on.   I say ‘sort of’ because it was very understated.  Disco lights, some music (but not too loud), some alcohol (but not very much), some food (mainly cake).    Picking up race numbers was relaxed and easy.

There was no baggage drop.   It was possible to leave a small plastic bag with your keys and wallet behind the desk at reception, but bags were just left in the changing rooms.   “This is Switzerland,” I was told, “no-one’s going to steal your bag from a gymnasium on New Year’s Eve.”    And, reader, they were right.  No-one did. 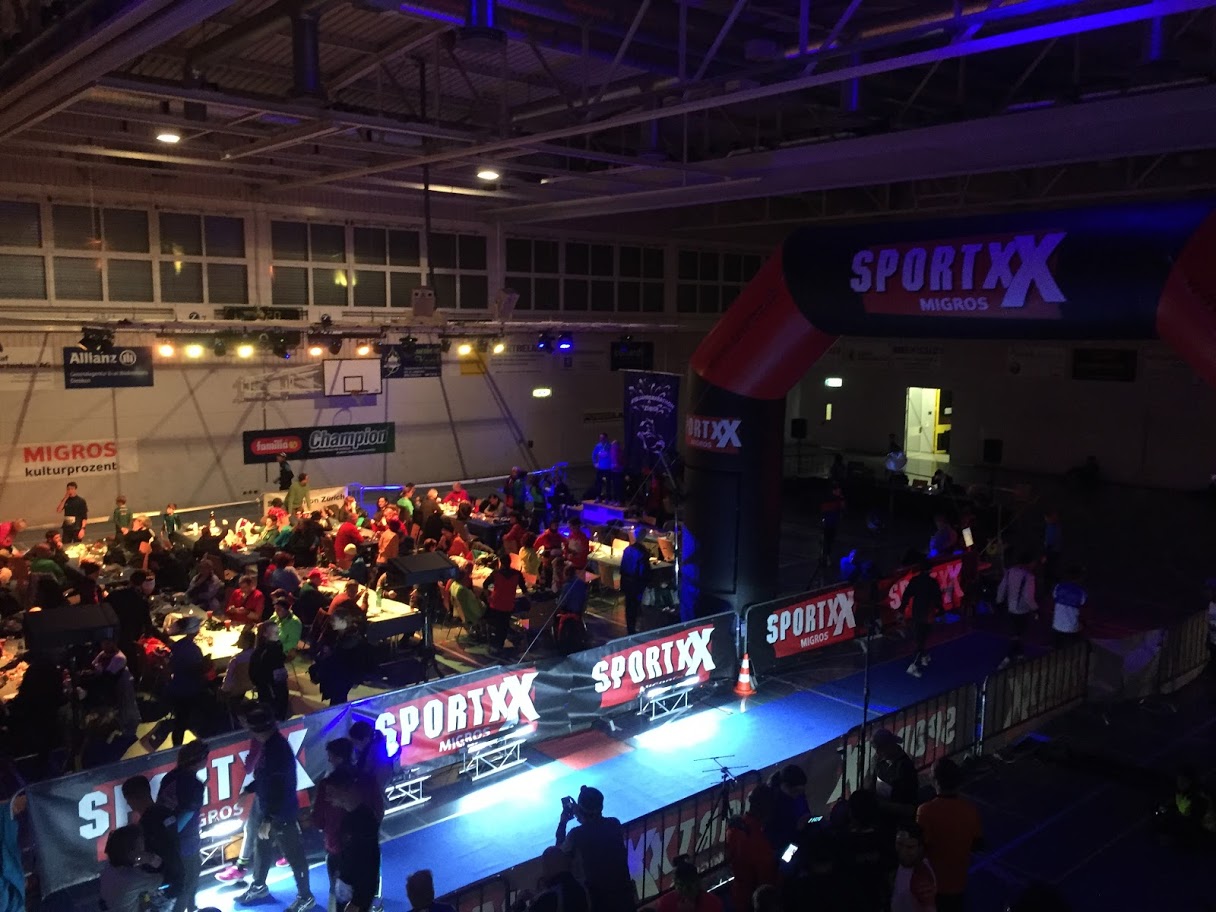 We received our goodies bags at registration, rather than after the race.  An eclectic selection of bits and pieces, including a 500g pack of dried spaghetti.

Last year’s race took place in -9C and snow.   Tonight was positively balmy.   It was “only” around zero degrees and the slight drizzle we were experiencing wasn’t predicted to get any worse as the night went by.   We stood around inside the main hall of the gymnasium and waited for midnight.    A few of us nipped outside to get the GPS on our watches synchronised.   There was a little bit of discussion about whether we’d need to wear lots of clothes or just a single layer.  (I opted for a tee shirt, running tights and my Gore windstopper… a wise decision.)    Then,  “Funf, Vier, Drei, Zwei, Eins” and beeeep, off we went.

There were about 1,000 runners and we all set off at the same time.  Most were doing one 10k circuit; a large number of us were doing a half marathon and a good number of brave souls were going for the full 42.2km.   Having no starting pens was a little frustrating, but pretty soon we were out on the track and finding a sensible pace.    As we exited the hall, we were able to run through a sentry of fireworks which was very exciting and, as it was midnight precisely, the sky was full of fireworks.    What a way to see in the New Year. 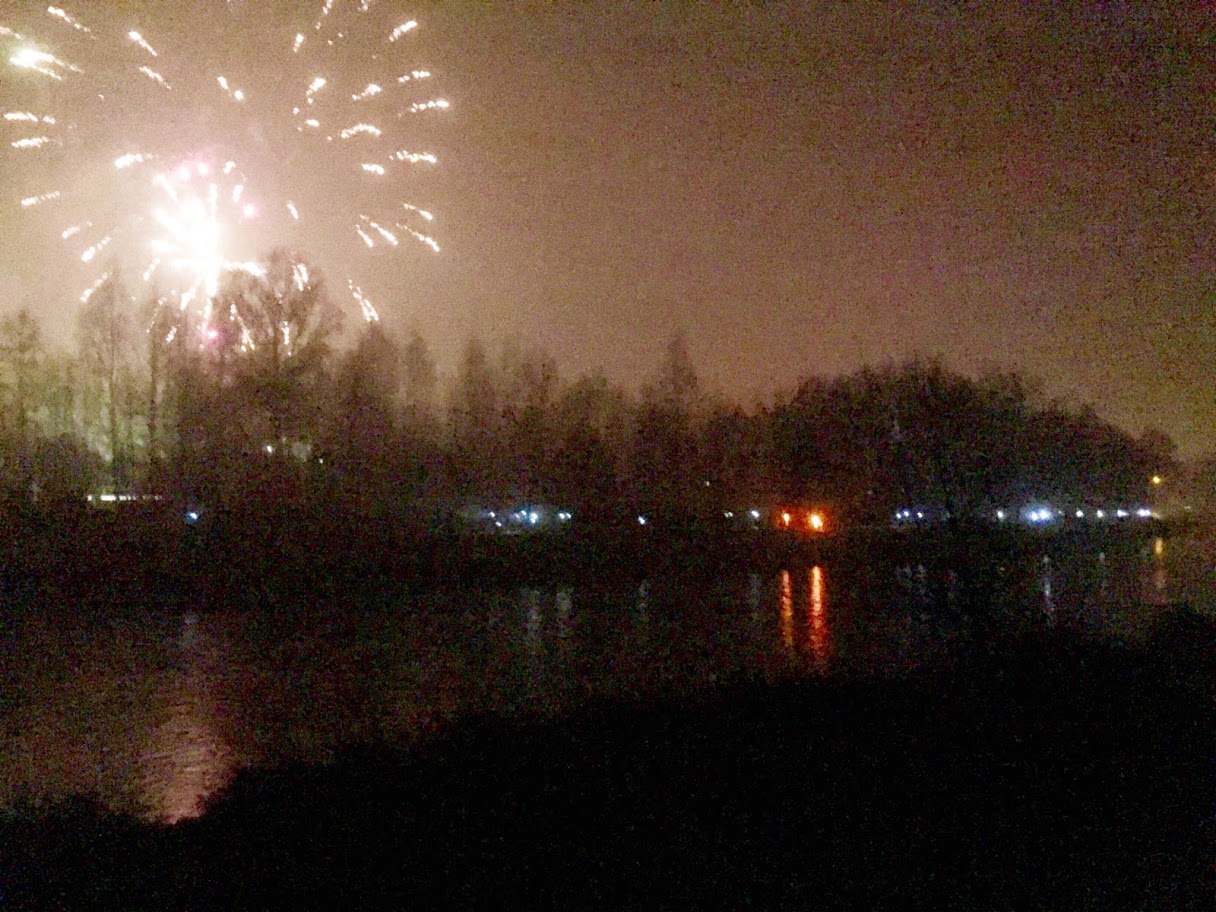 I have never run a race in the dark before.   I was glad that I had brought a good head torch with me as it could have been quite dangerous without one.  The route was a simple one.  5km down one side of a river, over a bridge and 5km returning on the other side.   Completely flat.   The organisers had painted hazards, such as drain covers and tree roots with luminescent paint, which was very clever.    I should have worn my trail shoes rather than road ones, though, as the surface of the path was very stony – and by the end of the race things were pretty uncomfortable.

A new experience for me was having warm drinks provided at the water stations rather than cold ones.   This was a bit strange, but very welcome as the mist began to gather and the coldness of the night closed in.

I was slower than normal, which I guess, considering the conditions, wasn’t surprising.   Even with a headlamp, it was sometimes difficult to see – my breath turned to vapour in the cold and reflected the light back into my eyes.   It really was very, very dark.   There was no street-lighting so all one could see were other people’s headlamps.   Very atmospheric, but slightly spooky, particularly on the second lap, when you could also see runners on the other side of the river. 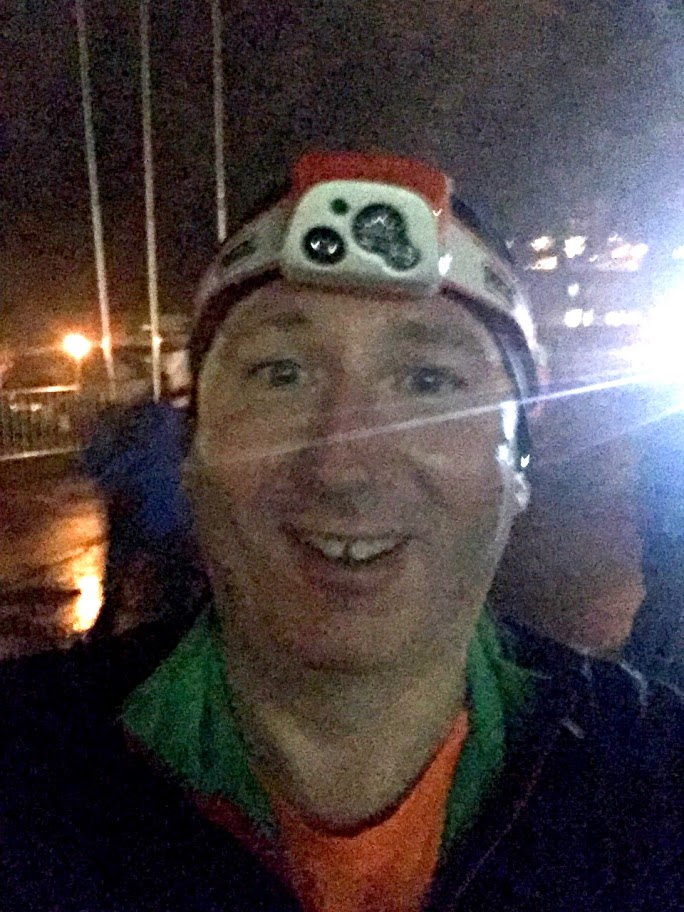