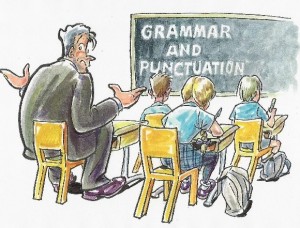 2013 will be the year that I am finally exposed as the bigoted, prejudiced and intolerant person that I really am.   For, whilst I would like to think that I relish inclusivity in most parts of my life – and indeed have been known actively to fight discrimination and injustice – there is one group of people I simply can’t stand:   Those that use English badly.

I can cope, almost, with youth-speak (as long as it’s being used by young people and not by middle-aged men in grey suits pretending to be eighteen years old.)    I can cope with the fact that Americans speak English using a very different vocabulary to that of the rest of the English speaking world.   (Incidentally, “different to” is correct English.   I checked here.)   But sloppy choices of words, punctuation and grammar do make me very, very irritated; often to the point of saying, “tut!” aloud.

Of course, I am as guilty of such sloppiness as many of the people I choose to despise.   So my self-hatred is often unconfined.   In particular, I note that I often start sentences with a conjunction.  I learned that from my Dad, who used to drive my Mum completely mad when writing his apparently scholarly books about Queen Victoria, or Horatio Nelson, by adopting the style of the advertising copywriter – which, of course, he was.   And I do tend to use a hyphen in the middle of a sentence – because I am not entirely confident with the use of the semicolon.

I try my hardest not to overuse words.   But I know that I slip into this all too often, particularly at work.    Apparently, I use the word ‘brilliant’ a little too much for people’s liking.   So I was delighted to see today that, “while the U.S. Congress has been kicking the can down the road and inching closer to the fiscal cliff, the word gurus at Lake Superior State University have doubled-down on their passion for the language and have released their 38th annual List of Words to be Banished from the Queen’s English for Misuse, Overuse and General Uselessness.”    That last sentence includes a fair representation of words from this year’s list, but you can find the full record at http://www.lssu.edu/banished/current.php

For 2013, I am going to try to give up using the following words and phrases:

And, like any newly converted enthusiast, I shall be jumping down the throat of anyone I meet who uses any of these.

Apart from that rather irritating use of the hyphen, I’m pretty good at spelling and punctuation.    Years spent teaching nine and ten year olds have clearly affected me.    (Note that I used the word ‘affect’ and not ‘effect’ there.)   So, in 2013 I will also be continuing to get my red pen out to deal with the following atrocities, including those that Sarah Ebner listed in today’s Times:

So, what words, phrases, misspellings or punctuation mistakes really rile you?    Do let me know.    But don’t get me started on text-speak…