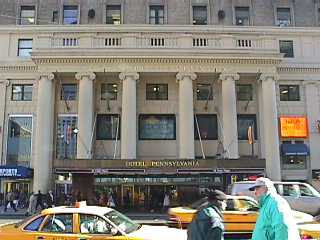 I have meetings in New York this week. I love New York. Well, I love Manhattan. If truth be told, apart from the odd foray into Brooklyn for pizza or a visit to a school, my knoweldge of NYC is limited to the island – and even then, only the blocks south of Central Park. But I do love it. Just as London is said to have a smell of its own, so does NYC. A mixture of steam, rotting garbage and engine oil, I think, which somehow combines to create something special rather than nauseous. I love the bustle. I enjoy riding the subway and getting takeout meals that you weigh to find out how much you have to pay. It’s a fun place. 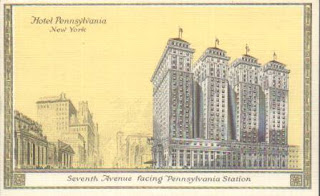 This time, I’ve taken a risk and am staying at the Pennsylvania opposite Penn Station. It has a reputation for being a bit of a dive. When it was bult in 1919 it was the biggest hotel in the world, ready to serve those coming into town from Long Island with ballrooms, roof gardens and swish restaurants. The hotel played host to many of the Big Band Era’s greats, including the Glenn Miller Orchestra – who forever immortalized the hotel and it’s phone number in the 1940 hit “Pennsylvania 6-5000”. It has has had the same phone number since 1919. 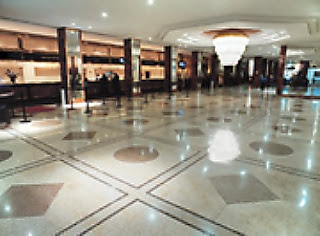 But since the days of Big Band the hotel has rather lost its way. It’s become known as a cheap railway hotel with run down rooms – often being used as a long-term hostel for those who are close to finding themselves on the street. It has a relatively smart reception space, but once you get past the concierge who guards the lifts, the corridoors upstairs have been said to lead to New York’s rather seedy underbelly. In the last couple of years, however, the hotel has been trying to spruce itself up. It has done up a few of its 22 floors, replaced worn out furniture with new stuff and sent its staff to charm school. 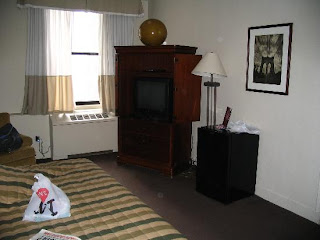 I am staying in one of the renovated rooms. It’s bigger than the hotel rooms I normally use in New York. It’s clean. The shower works. The bed’s comfortable. There’s a business lounge with coffee and broadband on tap. And it’s less expensive than virtually anywhere I’ve stayed before.
In many ways the hotel’s a bit like New York itself. Initially it seems glitzy. Then you realise that it harbours dark secrets as well as delightful ones. Finally you discover that actually it’s pretty much OK. And you can get twenty four flavours of coffee.