Off to the hills 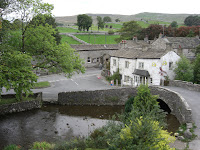 I had forgotten that train journeys at the weekend can be tricky. In a moment of what may turn out to have been genuine madness some weeks ago, I decided that I would take a week off work and do some walking. So, this morning I left London with GNER to head north to Malham in the Yorkshire Dales. The journey was fine until just after Leeds, when engineering work made a change to bus travel necessary – and for some reason the nice people at the railway deemed one minibus enough to transport a trainload of passengers. 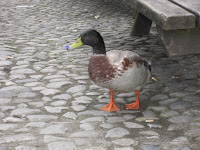 It wasn’t. So I arrived in Skipton rather later than expected. But, fortified by tea and cake, I then got a taxi to Malham and am now sitting in my room in a guest house, preparing for the start of the walk tomorrow.

I am going to walk a portion of the Pennine Way. So, over the next week, I will average about ten miles a day as I head north towards Appleby. After a summer of 40,000 people, I’m looking forward to the solitude.

This walk is going to be a bit different from the trecks I did as a teenager. No tent or heavy rucsac for me. Instead, those nice people from the Sherpa Van company (yes, they really are called that) will collect my suitcase each morning from the b&b at which I’m staying and deliver it to the next one. I leave each morning after a hearty breakfast (feeling perhaps like an Enid Blyton or Arthur Ransome character) with sandwiches for lunch in my daysac.

The walking’s going to be much harder than I remember from my youth. But at least I’ll be able to listen to something appropriate (Julie Andrews, anyone?) as I suffer.