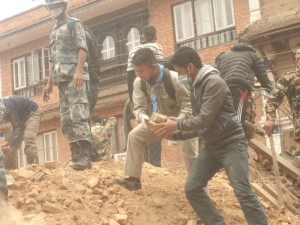 It’s just under a week since the world changed for the people of Nepal.   In those six days, more than 20 million GBP have been donated in the UK alone to emergency disaster relief.

There have been 60 earthquakes in the last 7 days:- There have been many tremors over 4 on the scale, the largest of which was 6.7.  (My friend in the British Embassy in Kathmandu was under the table in the FCO ops room at the time on the phone to London) .

Over 6,000 fatalities have now been reported.  The Nepal Army and police have changed focus from “rescue” to “search” and, with the occasional exception, such as yesterday’s miraculous release of a teenager who had spent days entombed, the operation will now mainly be body recovery.

150,000 Nepalis have left Kathmandu to return to home districts to support extended families and join their communities.

The UN says more than a quarter of the country’s population has been affected – 8 million people. The government has declared a state of emergency and asked for everything from blankets and helicopters to doctors and drivers.  This is the worst earthquake in the country in more than 81 years.

Hundreds of thousands of people are sleeping in the open. Even those whose homes are still standing are sleeping in the streets, terrified that more tremors will bring down already fragile buildings.  The government has issued a public statement dispelling rumours of another imminent large earthquake and encouraging people to return home, where possible. Because of rainfall in Kathmandu valley, life of the displaced people is becoming difficult. Rain is forecast for the next ten days.

Volunteers have been working round the clock, digging for signs of life as rubble slips dangerously around them. Hospitals are overwhelmed with casualties.

Friends in Nepal have been joining the voluntary effort:

So, what are the urgent needs?

There is also a need for household items and other aid for those who have lost their homes.

All 13 UK-based Disaster Emergency Committee member agencies, including Oxfam, are already responding to the situation – eleven of the DEC members have a long-standing development and disaster preparedness programmes in Nepal. The focus will be on the most vulnerable, especially for children, young mothers, women, elderly and people with disabilities.

Where and when markets re-establish, cash support will be a major way of helping the thousands who have been left destitute. In the meantime the following emergency relief items will be provided:

In the longer-term, the UK-based DEC agencies will look into providing:

Thank you again for your extraordinary generosity in supporting the fundraising efforts.  Your donations are already making a real difference.