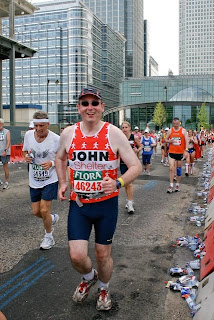 It was hot and humid. Very hot and humid. But I’m proud to say that I completed the course and am now sitting wearing my “official finisher’s tee shirt”. I had set myself a personal target of five hours and didn’t quite make it. I think my actual time will be more like five hours and fifteen minutes. (5:17:26 actually!) But I am very chuffed. And quite tired.

The day started badly. Of all the days that the Docklands Light Railway could break down, today was perhaps the worst for their PR guys. Hundreds of runners ended up walking from Mudchute station, through the Greenwich foot tunnel and through Greenwich town centre. I think we added about two and a half miles to the day’s experience. I arrived at the start with minutes to spare, but everything was OK. Less time to spend getting nervous in the “pens”, in fact.

The first ten miles went very quickly and painlessly. Plenty of water, Lucozade sports drink and even showers every so often to cool us down. I even managed to phone Ruth whilst I was running round Cutty Sark. Running over Tower Bridge was wonderful, but then, of course, we turned the corner into the Highway and saw the rather faster runners coming back in the opposite direction.

I measured my run in three-quarters of an hour segments. At the end of each I ate one of the disgusting carbohydrate gels that I had used during training to give me energy. This worked well, apart from the very last one I ate, which repeated on me in a particularly uncomfortable way.

Peeing is something you don’t think about particularly when training. (Wanstead Park has a very well positioned lavatory that I have used regularly!) Today the choice was queuing for portaloos or finding a discrete wall. My favourite one was in the underpass at Westferry Circus. There must have been groups of fifty blokes all destroying the concrete render for hours.

Running through the Isle of Dogs was better than I had hoped. Before I knew it I was running along Bank Street in Canary Wharf and got a message from Shelley and Marc that they had positioned themselves by Barclays. I ran past Citigroup, Morgan Stanley, Credit Suisse, BarCap, HSBC and then, there they were, dressed in red tee shirts and armed with cameras. I hope the pictures are flattering! (I’ve added one of the pictures now. I seem remarkably happy!)

Poplar was where I hit the wall. (Between 19 and 20 miles) I walked for a bit – as did a lot of other people, but when we reached the Highway again, I decided to run. And I didn’t then stop running until the end. The last four miles were extraordinary. Crowds five thick. Loads of people shouting my name. (I must have looked particularly vulnerable.) Big Ben got closer and closer and then I was turning right into Birdcage Walk. 600m to go. 400m. 200m.

And then I’d finished. As the steward put the medal round my neck, I burst into tears. I guess this was a mixture of exhaustion and elation. I stopped pretty quickly. Then I hobbled with many others up to Piccadilly Circus and took the tube home – For the first time in my life someone got up and offered me a seat. I accepted.

It has been a wonderful day. I’m delighted to have raised a considerable amount for Shelter. And I have achieved something that I really thought I never would. I have run a marathon.