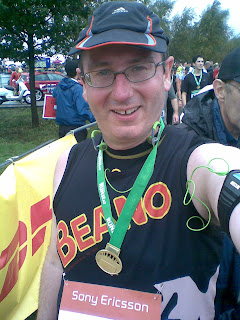 The day didn’t start well, although no-one can blame the event organisers for the vagaries of London’s tube system. Just at the critical moment when thousands of people were trying to get to the O2, London Transport suspended the service on the Jubilee line, stranding us all on the other side of the Thames. No extra buses. No announcements. Aren’t we meant to be getting ready for a few big races in less than four years’ time?

Having heard the tube was down, the organisers sensibly put back the start for 45 minutes. By the time I did arrive at the O2, it was clear that the logistics were creaking. Very poor signage. Fewer lavatories than needed. No loo paper. And, of course, it was pouring down with rain.

The grouping of runners prior to the start was chaotic. No signs, just one man and a megaphone, explaining that we should take no notice of our colour coded bibs as they had been printed wrongly. The pens were exposed to the wind (but where isn’t on the Greenwich Penisular?) and by now the rain was coming down really hard.

Once we got started, the race itself wasn’t bad at all; though the organisers’ assertion that it was ‘fairly flat – an ideal opportunity to record a personal best’ was a little disingenuous. As anyone who has run the London Marathon will know, the first few miles from Blackheath to Greenwich are downhill… And we, of course, were climbing to Blackheath, before coping with what could have been a treachorous steep autumn leaf strewn hill down through Greewich Park. Hills are fine if organisers warn runners about them… Lucky I’m relatively local. 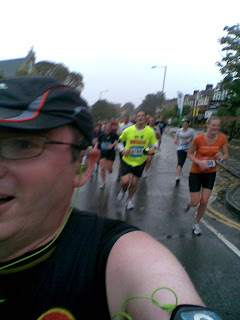 The promised bands to keep us ‘running to the beat’ had not materialised, perhaps due to the dreadful weather, perhaps because of the delayed start. So, no ‘inspiring 39 piece Royal Artillery Band’ – or at least not by the time the middle of the field had reached Woolwich.

Marshalling round the course was lacking in humour or encouragement, but, to be fair, these poor people had had to stand in the rain for forty five minutes longer than they’d be told. There was plenty of water and lashings of Gatorade. It might have made more sense, however, to dish out water in bottles and Gatorade in cups (instead of 500ml bottles). But I do appreciate that some may think that a rather petty criticism.

The finish was well orchestrated. A quite nice medal – though no date or mention that this was a half marathon on it.

Where the organisers really came unstuck was with getting kit back to tired, wet and cold runners. I queued for 20 minutes while one man tried to find and hand over kit bags from his part of a waggon. The system was slow, inefficient and woefully understaffed.

Then, just to add insult to injury, a ridiculous walk ensued round the edge of the O2 site, down a narrow walkway, with bottlenecks to the side of the arena – with no system for reuniting runners with family.

This was not a cheap event. And it wasn’t organised by volunteer, unpaid, running club memnbers, but by an organisation called IMG Mass Participation Sport. I will be writing to Nick Rusling to give him my feedback.

Oh, one last thing, the promised text message with my time and position has just arrived. Time correct, (2 hours and 5 minutes) but apparently I came 0th! What’s that about a brewery?

I note that I’m not the only person to be moaning. The Runners’ World website has a few comments…