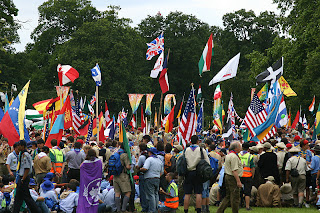 It’s hard to believe that the Jamboree is nearly at an end. For ten days, we’ve been lucky enough to host 40,000 young people and their leaders at Hylands Park – and they really have had the most brilliant time. I’ve had a pretty amazing time too – This has been my fourth World Jamboree; each one has been different, but it’s been great to be part of the organising committee this time rather than ‘just’ a Contingent Leader.Even though Tuesday night sees our closing ceremony, the national contingents have now started their ‘take down’ of the site. The village we created with tents for each country to exhibit things about their nation is strangely empty tonight. The Italians hosted a pasta party before taking dwon their tents(very good pesto!) and the Brazillians got out the cheese and wine (for adults only, of course). The young participants have been organising an enormous carnival procession which has weaved itself around the site, through all the subcamps. As I type (at about ten to ten on Monday evening) I can hear the drums and whistles just outside Jamboree HQ as they march past.Working on an event like this can have its surreal moments. I wandered past one camp this afternoon to see a group of Scouts creating an enormous model fish ready for tonight’s carnival… a whole Troop of teenagers, sitting on the floor studiously sticking tin foil to a large cardboard shape, whilst listening to rap music on the radio. And this morning, whilst I was chairing our daily meeting of the hundered and fifty or so national contingent leaders in a marquee beside Jamboree HQ, we were joined by a horse, led into the tent to say hello. It and its rider had just arrived from Italy – and they had travelled the whole way on (four) foot. The meeting stopped for ten minutes for photos before we continued our discussions about coach movements and other logistics.This is an extraordinary event. One that I’ll remember for the rest of my life. And sometimes I’kll remember it for some very strange reasons!