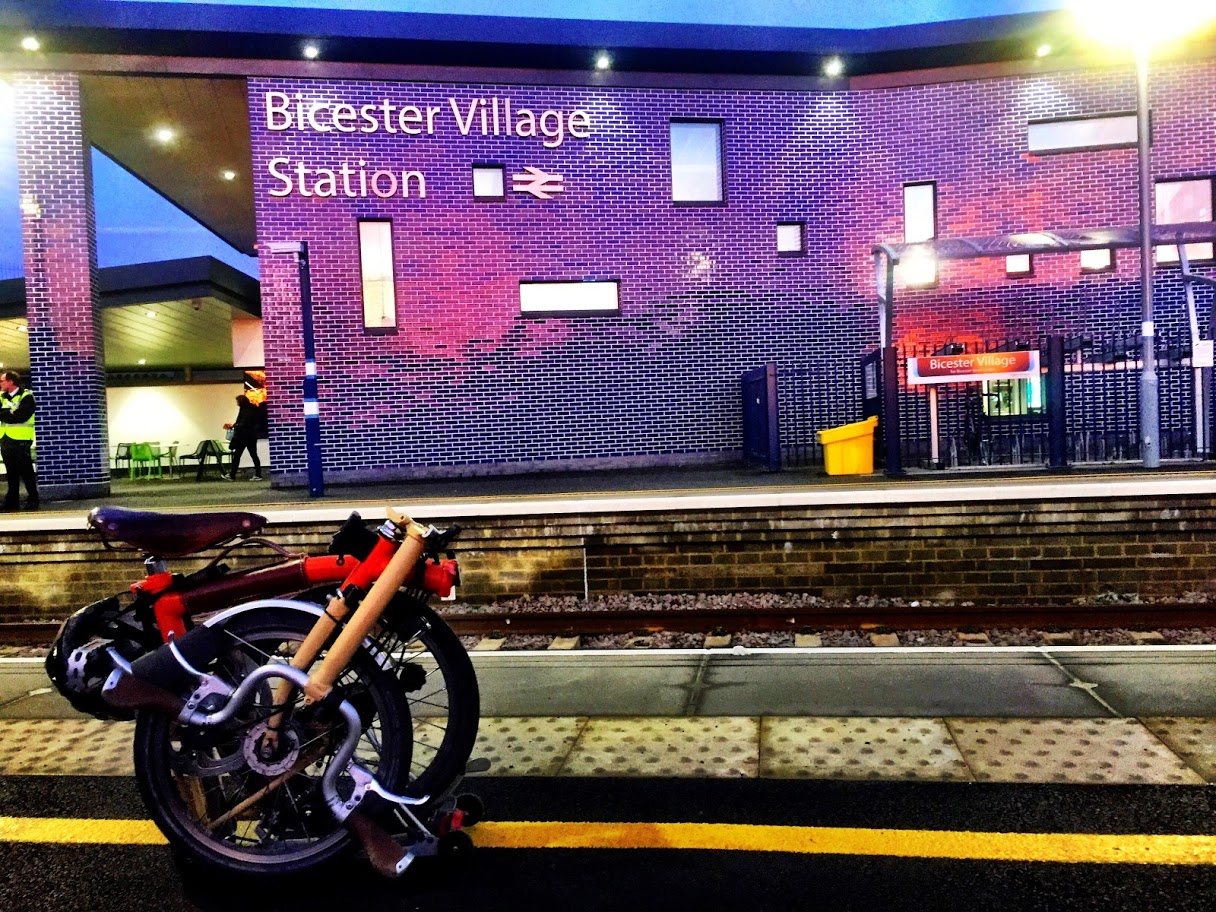 In love with a bicycle…

I’ve owned my Brompton folding bike for about three years now and can’t imagine life without it. I am still surprised and a little embarrassed by how much I love it. I bought it originally because I was fed up with the last part of my daily commute, which involved using the London tube at rush hour.  But it has become more than just a useful travel tool for me.  Like many Brompton owners, I’ve become a bit obsessive about it.  It almost helps to define me.

Designed by engineer Andrew Ritchie, the Brompton is a British folding bicycle that has been in production since 1987 and has remained largely unchanged since. You can read about the history here. There are many folding bikes on the market these days, but the Brompton offers the most compact and easiest fold, with the durability and speed of a full-sized bike. It has 16″ wheels and a hinged frame,  hand-made and assembled in Brompton’s factory near London.  A selection of colours, handlebar setups, gearing options and accessories is available.   Just for the record, mine is an M6R model.

A Brompton is fearsomely expensive.   And that’s before you start buying accessories for it.   (My specially designed bag that clips on to the front of the bike costs is the most expensive briefcase I’ve ever bought.)   I bought my Brompton on eBay, second-hand, and it still made a very hefty dent in my credit card account.   It’s orange and cream, with six gears, modified grips on the handlebars and a dynamo driven headlamp that can blind the unwary if it’s viewed from the wrong angle.   I have never owned a bike with character before.   My Brompton has personality.  If it were an animal it would be something like a Jack Russell terrier.  If it were an actor it would probably be Ian McKellen.  It is quirky.  And British.  And supremely confident whilst slightly self-deprecating.   Very like myself, I dare to think.

It travels with me every morning on my commute from Bicester to London Marylebone.   It sits, silently (because it is a bicycle and bicycles don’t usually talk) at the end of the railway carriage, folded beautifully to take up no more room than a small suitcase.   When we arrive in London, it unfolds in less than 15 seconds and I wheel it the length of the platform along with the five or six other Brompton owners who travel at the same time each day on the same train.   We talk to each other quite often (unlike most commuters), though our conversations are fairly limited.   Actually, very limited.   The theme is always Bromptonesque –  the superiority of the Brompton over any other folding bicycle; recognition of a new piece of Brompton luggage; how the morning’s weather might affect the onward journey for our Bromptons.   Together we edge through the ticket barrier and out on to the station concourse.   And then, the best ride of the day begins.    From Marylebone to the office in Victoria is just 5km – mainly through the Royal parks.   It doesn’t matter is it’s raining or if the sun is blazing – (or indeed, because this is London, a combination of the two) – the ride gives me the opportunity to think, to breathe and to prepare myself for the day ahead. 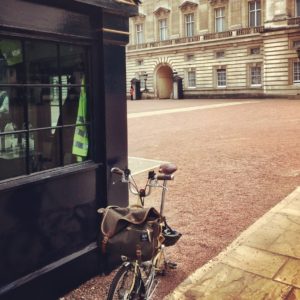 Part of the journey takes me across the front of Buckingham Palace.  I’ve been stopped by early morning tourists there on a number of occasions who have asked to take my photograph.   The last occasion was just a couple of weeks ago when a Japanese couple explained that, with my bike and the backdrop of the Palace behind me, I was the epitome of “the perfect English gentleman”.    Occasionally, my work actually takes me into the Palace for meetings.   Whilst I’m inside, my Brompton waits attentively for me by the front gate.    I once mentioned to the police officer on duty that I didn’t have a chain and lock. He brandished his machine gun and said he felt attaching the bike to the railings probably wasn’t necessary.

I ride the Brompton all around London.   I enjoy taking it into the reception areas of some of the country’s biggest companies, and then into their boardrooms where it sits in the corner whilst I give presentations about why it’s important to support young people and their education.   I like the fact that I am continually asked by the nation’s CEOs to demonstrate how to unfold it.   I like the fact that London cabbies will wind down their windows at traffic lights and say hello.   I like the fact that small children tug at their parents’ arms and point at the bike as I ride past them.   This bicycle makes people smile.

I know I probably look like a bit of a clown on my Brompton.   Those little wheels.  The garish colours.   I don’t care.

I adore my little bike.