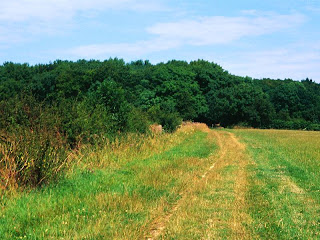 And then, on my birthday, I ran away again, this time on the Standish Woodland Chase, a multi-terrain race of nearly ten miles through woods on the Cotswolds escarpment above Stroud and Stonehouse.

It was hell. The first mile and a half was uphill. Not just uphill, but up a very steep hill. I never really got into my stride and found myself jogging and walking round the two circuits at the top of the hill feeling pretty unimpressed with myself and the event. But I did finish. Just. (I came 112th out of 122 finishers!)
The picture shows the top of the hill. There are no other runners to be seen. This is not, as you might think, because they’re all miles ahead of me. It’s actually because this photo was taken on a completely different day, when it wasn’t raining, I wasn’t out of breath and I wasn’t stupid enough to be running a ten mile race. Enough said on the matter I think.