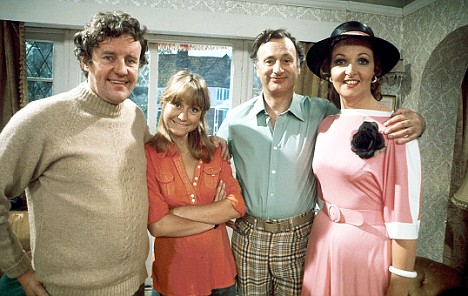 I am turning into a stereotype. Despite protestations of individuality, supported by being half-Australian with a proud Jewish heritage, I know that I am viewed by several non-British friends as being quintessentially English, middle class and highly conventional. They’re right. I’m becoming my Dad. And my Mum too – who, despite being completely Australian, is one of the most English people I know.

As a child in the seventies, I grew up learning what the Mitford sisters had described two decades before – what was ‘U’ and ‘non U’. I knew, perhaps through cultural osmosis, perhaps because my parents drummed it into me, that I would always use a napkin and never a serviette; that I sat on a sofa and not a settee; that I visited the lavatory rather than the toilet. That we had a drawing room and not a lounge. I still know those things. And I remain slightly perturbed by those that don’t.

I have begun to consider which decisions have now become terribly important for me in 2012. I recognise that even thinking about these things makes me an impossibly shallow individual. But there we are. Better to accept my appalling situation than pretend otherwise.

My list of the most pressing critical decisions includes:
Coffee – espresso or cafetière?
Tea – milk in the cup first or last? And should that really be a cup? What about a mug?
Tube or bus (or taxi)?
Tee shirt or Polo shirt?
Waitrose or Lidl?
iPhone or Blackberry?
Independent or state education?
Theatre or cinema?
Vegemite or Marmite? (Possibly only a really pressing issue for those of us of mixed parentage…)
Pizza Express or Pizza Hut?
Lexus or Landrover?
McDonalds or KFC? (Tricky one this. I know the correct answer should be ‘neither’. But imagine you had to choose between the two… I know; ghastly; but seriously, imagine if you really did have to choose…)
Blazer with jeans or with cavalry twills?
Jogging or the gym?
Costa or Starbucks?
Apple or Windows?
Blue Peter or Magpie?
Mr Kipling or home-baked?
Downton Abbey or Casualty?
Gareth Malone or Mary Berry?

Views? Please do tell. Or add to the list.