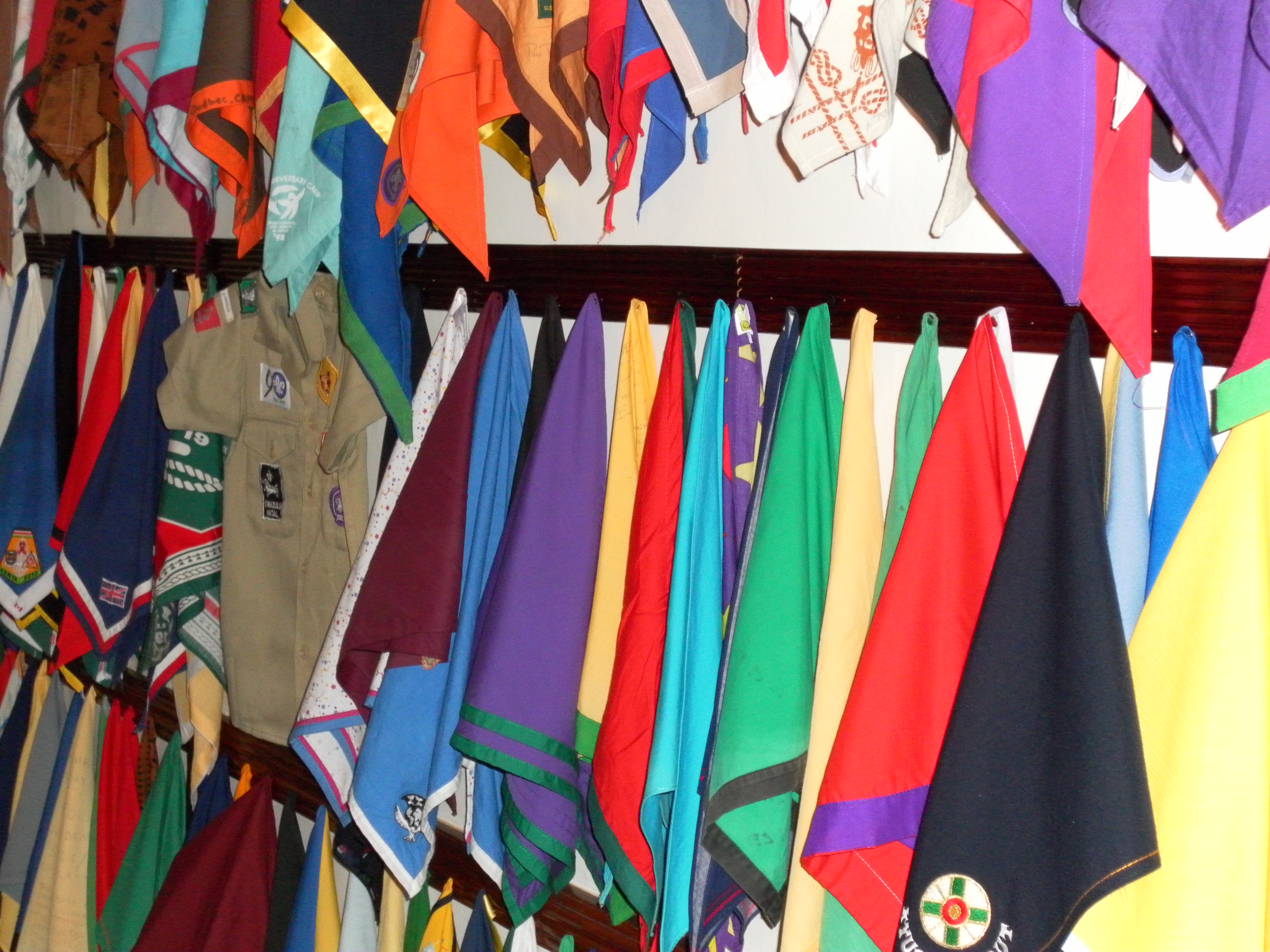 In France they know it as a ‘foulard’; in German it’s a ‘halstuch’. In Mexico and the Spanish speaking word it’s a ‘pañoleta’. But where people speak English, they often can’t quite reach agreement about what to call it. I’m referring, of course, to that triangular piece of cloth that a Scout rolls up and wears round his or her neck. It is, above all else, the best way to recognise a Scout, but whether it’s a neckerchief, a scarf, a neckie or some other diminutive, well you only have to post a reference to it on social media to assure a barrage of conflicting views.

So, let’s get this straight, once and for all. It really, really doesn’t matter what you call it. The choice of word is something that’s been agreed at local level (at least in the UK) for years, and has often depended only on what the Leader handing it to a new Scout has learned to call it. And everyone is right.

Baden-Powell himself wrote about this ubiquitous part of the Scout uniform in Scouting for Boys, but he wasn’t definitive. ” The Scout Uniform is very like the uniform worn by my men when I commanded the South African Constabulary. They knew what was comfortable, serviceable, and a good protection against the weather. So Scouts have much the same uniform… the scarf or neckerchief which is folded into a triangle with the point at the back of the neck. Every Troop has its own scarf color, and since the honour of your Troop is bound up in the scarf, you must be very careful to keep it clean and tidy.”

The origin seems to be in Robert Baden-Powell’s participation in the Second Matabele War in 1896; where he worked with Frederick Russell Burnham, an American-born scout employed by the British Army. Baden-Powell copied Burnham’s practical style of dress, including “a grey-coloured handkerchief, loosely tied around the neck to prevent sunburn”.

The UK’s “Policy, Organisation and Rules” hasn’t been consistent in what it calls the thing. In 1910 it was referred to as a neckerchief – and specified that different Patrols would have different colours. By 1919, it was referring to a “Scarf of the Troop colour worn loosely knotted at the throat and ends.”

And thereby comes another knotty problem – literally. How should one fasten one’s scarf / neckerchief / neckie / thingamyjig? Some traditionalists have insisted that the ONLY way to wear it is by using a ‘woggle’ or, as the Americans know it, a ‘slide.’ In the early days of the Scout Movement in Great Britain, the Scout scarf used to be tied with a loose knot at the neck and naturally became very creased. However, by the 1920s, the Americans were experimenting by using a ring made from bone, rope or wood to keep their scarves together. Bill Shankley, aged 18 and one of two permanent camp site employees at Gilwell Park, had the job of running the workshop and coming up with ideas for camping equipment. He found out about the American rings and decided to try and go one better. After various attempts with different materials he finally made a Turks Head knot – adopted in the days of sailing ships when seamen developed decorative forms of rope work as a hobby – made from thin sewing machine leather belting. He submitted this to the Camp Chief and, no doubt, the Chief Scout, for approval and had it accepted.

The American rings were called ‘Boon Doggles’, most probably because they were made of bone, and the name was a skit on ‘dog bones’. To rhyme with ‘Boon Doggle’, Shankley called his creation a ‘Woggle’. An article in The Scout on 9th June 1923 by ‘Gilcraft’, called ‘Wear a scarf woggle’ made reference to the idea of having become very popular among Scouts who had been quick to imitate the fashion set by the Ist Gilwell Park Scout Troop (i.e.: Wood Badge holders).

In many European countries, the practice is now not to use a woggle, but instead to fasten the ends with a ‘friendship knot’. This is one of the eleven basic knots of traditional Chinese knotting, a craft which began in the Tang and Song Dynasty (960-1279 AD) in China. The Chinese and Japanese names for this knot are based on the shape of the ideogram for the number ten, which is in the shape of a cross. The Ashley Book of Knots, first published in 1944, says: “A decorative Chinese Loop. This is commonly employed as a Lanyard Knot. It is handsome and secure.” I was always told, though haven’t had it substantiated, that the reason it’s called a Friendship Knot is that you need to have friend to tie it for you, rather than tie it yourself. Certainly, the Friendship Knot gets around the problem of lost woggles besides being a great friendship tool. It could be argued that the return to the Friendship Knot is actually a return to the Policy, Organisation and Rules of the Scout Association in 1919 – now that would be an interesting response to a traditionalist Scouter!

I rather like this little homily from a USA Scouter:

“My first Scoutmaster taught the importance of the Scout Oath and Law using the Neckerchief. He would hold the open neckerchief in his hands and remind the young scouts of what the last item of clothing they put on when they were getting dressed for the meeting was, his neckerchief.

He said that it was no coincidence that the neckerchief had 3 sides, just like the three parts of the Scout oath. He would run a side through his fingers and say “On my honor, I’ll do my best. To do my duty to God”. The first and longest side is to remind you of your long-standing duty to God. This whole side is hidden from view, just as your faith is deep inside you. But with out that faith, there is no strength for the rest.

Holding on to the neckerchief by the point he would run the next side through his fingers and say “To help other people at all times….” This shorter side is to remind you of your duty to help others. Remember it is some of this duty that shows to others, just like part of this side of your neckerchief shows. So do your duty to others well so that people might see the good work you do in the name of Scouting.

The last side also shows. He would say “To keep myself physically strong, mentally awake and morally straight.” This last side is your duty to your self. This shows to others as well. They will know that by seeing your uniform, you are a young man who is physically fit. Has a strong moral foundation and who is not apt to fall into the temptations of drugs and alcohol.

He would then say that this was a means by which we could remember the Scout Oath, every time we got dressed in uniform. He also gave us a means by which to remember the Scout Law. While wrapping the neckerchief up for wear, he said to wrap it tight in small twists, 12 in fact. And to repeat the 12 points of the Scout Law as you did so. Then as you placed your neckerchief around your neck for wear, the elements of the Scout Oath and Law were with you. They were in fact part of you.”

The colours of scarves / neckerchiefs certainly are chosen to signify different things, but the practice differs now around the world and, often, from activity to activity.

In the UK, each Scout Group chooses its own scarf colour, so Beavers, Cubs and Scouts all wear the same colours. In the early days of UK Beaver Scouting all Beavers wore turquoise ones, but this changed pretty quickly. Explorer Scout Units, being a District provision, get to choose their own, hence the wide range of VERY strange colour combinations, often luminescent, that are now available. Special scarves / neckerchiefs are often made for events, with different borders denoting different categories of participant. This system has also been used at recent World Scout Jamborees. There’s a national scarf / neckerchief as well, in blue, white and red, which can be worn when abroad or representing the UK Association as a whole. (I’m rather proud of this, because I actually helped to introduce it to the Movement in 1992.)

In Canada, while most groups use colour neckerchiefs, there is also an optional alternate universal pattern tartan neckerchief: white plaid on red for Scouts, gold plaid on dark green for Cubs. Alternating thick and thin lines of the plaid spell out “CANADA” in Morse code. In Australia, Queensland uses a single maroon necker for the whole state, while the other states allow groups, Venturer Units and Rover Crews to choose their own necker. Region and Branch Teams also have their own neckers. In Hungary, as well as the Hungarian diaspora communities in countries such as the U.S.A., the necktie color is national rather than distinctive for each troop, being light blue for ages 10 and younger and grass-green for ages 11 and up.

In the USA, the colour of the neckerchief shows how far through Cub Scouting a boy has progressed. (Incidentally, I don’t think there’s any argument about nomenclature in America. It’s definitely a neckerchief there.) The colour is orange with navy-blue trim for Tiger Scouts, gold with navy-blue trim for Wolf Scouts, light blue with navy-blue trim for Bear Scouts, and plaid for Webelos Scouts. For Scouts, the choice of colour is normally made for each Troop. Interestingly, unlike in the rest of the world, until very recently, USA Scouts weren’t allowed to wear their neckerchief with anything other than full Scout uniform. Now, they’ve chosen to go the same way as the rest of the world and can wear it as a single item with ‘mufti’ to show that they are Scouts.

In many countries, whilst there may be an official uniform, a scarf / neckerchief is often the only item that a young person can afford to buy. Of course, it’s a truism to point out that it’s the person that makes the Scout, not any uniform that they are entitled to wear.

Perhaps the most famous Group scarf / neckerchief is the one for the 1st Gilwell, the Group to which all Wood Badge holders (trained Scout Leaders) belong. It’s taupe in colour and bears a tartan patch of the Maclaren clan, honouring William de Bois Maclaren, who donated the £7000 to purchase Gilwell Park in 1919 plus an additional £3000 for improvements to the house that was on the estate. Mine is moth-eaten, but I wouldn’t part with it for anything.

So, when do you wear which scarf / neckerchief? Well, in the UK there used to be an etiquette that you always wore your Group scarf on Group business, but if not attached to the Group you wore a plain green scarf or the Gilwell one if you were entitled to wear one. Nowadays, that etiquette no longer holds. My advice would be to wear what you want.

And, of course, I know plenty of young people (and some adults) who choose not to choose. Instead they wear several at once. Good for them!

And, for the record, it’s always been a scarf for me. Don’t know why, but it always has.