An evening on the other side… 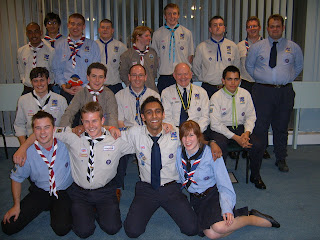 It took me a ridiculously long time to get there. Friday afternoon is never a good time to travel around the M25, but by shutting the A41 at Hemel, the Police had created the biggest tailback known to man – I left home at 5:00 and arrived two and a half hours later.

Anyway, delicious dinner, great company – good to see the Coopey family, the elder Pecks, Chad Lake and a load of other Scouty people I’ve known for many years. In fact, we worked out that I had last spoken at the same event thirteen years ago, when the Coopey children were only months old. (They’re considerably bigger now!) My speech was a cut down version of the one I gave at Warwick and so it was slightly offputting to recognise at least two people who’d heard me speak there. They were kind enough not to complain or heckle. Many thanks to Paul Spencer for the photograph, speedily emailed through.

Good luck to the young people who will be parading at Windsor on Sunday. I will think of you as I swelter in the expected heat in the centre of London as I labour round the 26 miles of the Marathon course…