A week in Malaysia 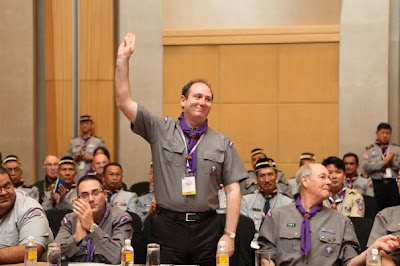 I have been visiting Kuala Lumpur over the last few days, attending the Asia Pacific Scout Conference as a member of the World Scout Committee. It’s been a fascinating week. The hospitality of our Malaysian hosts, led by the extraordinary Eric Khoo, has been exceptional. Nothing has been too much trouble. Every coffee break has produced more wonderful food and the various dinners and receptions have also helped me add to my waistline. I am, as my African friends would say, feeling ‘prosperous’ after a week of solid dining.

The conference has been held at the Hilton, just above KL Central Station. It towers above the city and, as my room was on the 30th floor, I had a brilliant view. I was able to choose from looking at the world from my bed or my bath – there were floor to ceiling windows in both rooms. And the largest plasma TV I have ever seen. And free laundry. And a ridiculous array of Malaysian and Western food laid out in the executive lounge for breakfast. Wonderful.

The conference mixed a whole range of governance type activities – elections, reports on the last two years, resolutions – with discussions about projects being undertaken by individual national Scout organisations. There is an interesting tension between ‘school-based’ Scouting, in those nations where Scouting is the country’s official youth activity and undertaken by all young people; and ‘community-based’ Scouting, which is what we’re more used to in Europe. School-based Scouting has extraordinary reach and penetration; there are over 15 million Scouts in Indonesia alone; but activities are not always funded properly by government and teachers often find themselves given the job of Scout Leader with little training or support. Community-based Scouting is often creative, dynamic and reliant on passionate volunteers; yet it has to compete with the myriad of other activities from which kids today can choose. Both sorts of Scouting envy the other, whilst defending their own advantages. Fascinating.

Some of the individual projects being undertaken are really very exciting. New Zealand has recently relaunched its brand with a strong emphasis on extreme adventure. Indonesia has worked with relief agencies to support life-saving activity in disaster areas. Street children in India have received education via the Scouts. (Actually, according to friends from Pakistan, we shouldn’t use the term ‘street children’ any more as it is seen as being too pejorative in some cultures.) This is a region with a rich mix of cultures and Scouting heritage. So discussions are always exciting and fascinating, particularly for a European.

One thing the Asia Pacific Scout Region does really well is entertaining. Amazing dances. Great food. (I think I may have mentioned this already!) And a bizarre (at least to European sensitivities) enthusiasm for badges, medals and certificates. I was a little taken aback, if extremely honoured, to be awarded Malaysian Scouting’s highest honour by the Minister for Education and Sport. I have also been inducted into ATAS – an Association of ‘Top Achieving Scouts’. Business card swapping is an important habit and I am coming home loaded with the details of many new contacts, as well as the updated email addresses and mobile phone numbers of a host of old friends.

Kuala Lumpur itself has been a tremendous city to visit. I last spent time here immediately after the Tsunami of 2003. Even then it was clearly modernising swiftly, but it is now a city that screams 21st Century at you. Its shopping malls are full of electronic goods. Wireless Internet access is everywhere (and usually free). The streets are clean and tidy, the public transport efficient, the shop owners helpful and very, very speedy in their service. But there are still touches of the ‘old’ Malaysia available if you know where to look. I was able to have my first taste of durian (the world’s smelliest fruit) from a street hawker and had a brilliant meal one night, sitting at a plastic table in a street, with the food being cooked on a brazier next to me. (I also managed to completely mess up my ordering of food and ended up with the most bizarre frozen salad when I thought I’d ordered a fruit juice.) The Petronas towers are as gob smackingly beautiful as ever. As are the women who try to get you to buy ‘genuine copies’ of Rolex watches and Gucci bags.

It’s been a great week. As I write this, I am waiting for my flight back to the UK, sitting in a lounge in KL’s equivalent of Gatwick airport. I am flying Air Asia, ‘the world’s most popular low-cost airline’, direct to Stansted. 14 hours. It’ll be strange to be back in England. And I’m going to miss KL, its heat and humidity. But the great thing about Scouting is there’s no need to miss my friends. The Internet means we will continue to talk regularly – and we’ll all meet up again in just a few short months when the World Conference takes place in Brazil.

There is much that the rest of the Scouting world can learn from the Asia Pacific Region. However, perhaps because it has half the world’s Scouts in membership, it risks being rather insular in its outlook. We need to ensure that we tell the story of what is going on in the region and get its leaders to visit other National Scout Organisations around the world to tell their stories and share their good practice.