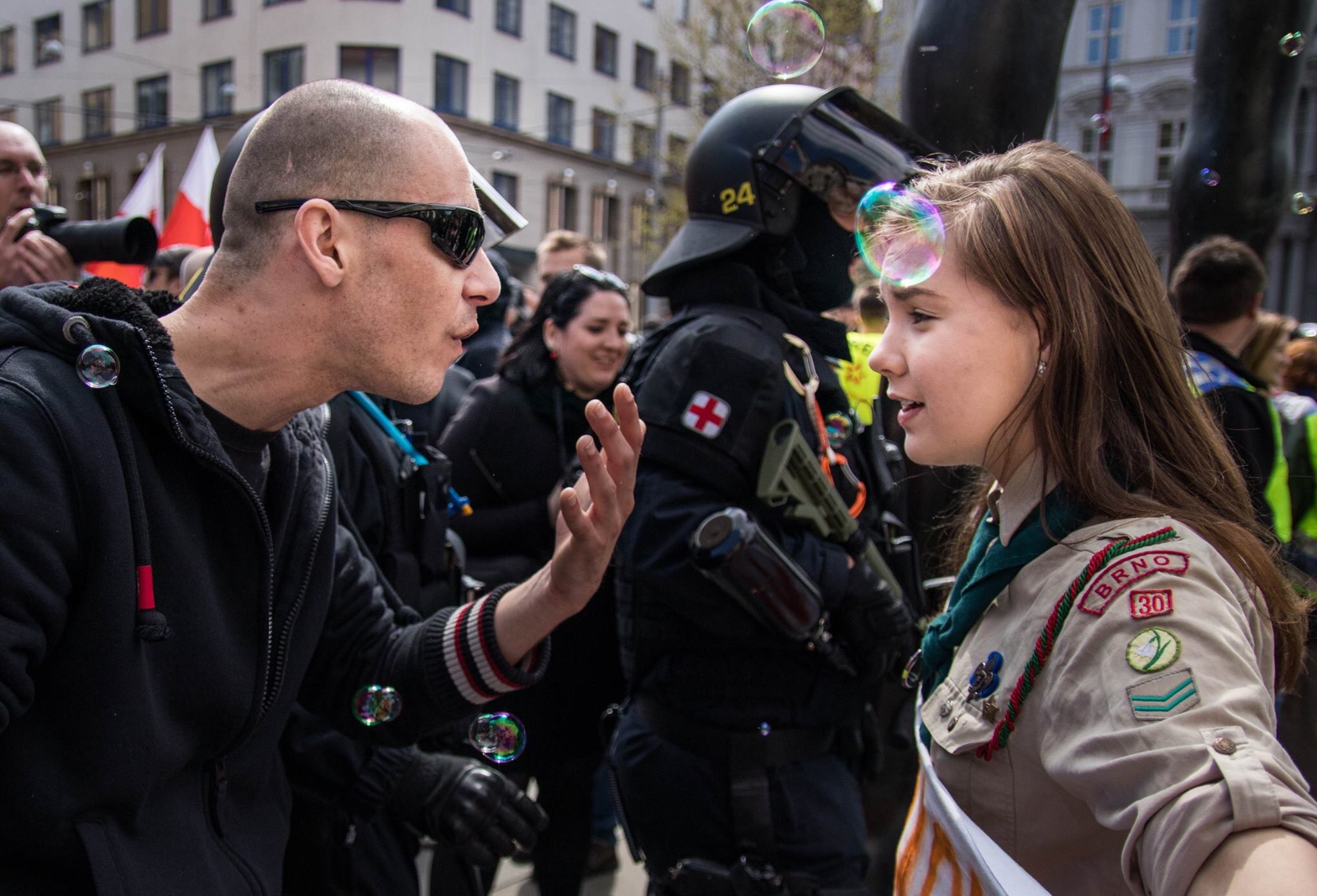 A question of politics

It has the makings of an iconic and historic photograph. Lucie, a young Scout from the Czech Republic, squares up to a demonstrator at a march organized by the far-right. The spirit of youth; an unspoken commitment to peace; hope for the future.    It’s perfect.

Except for one thing. Enshrined within the constitution of the World Organization of the Scout Movement, indeed in the first sentence of the first paragraph, is the commitment that “The Scout Movement is a voluntary non-political educational movement for young people open to all without distinction of gender, origin, race or creed…”

Was Lucie’s action (and those of the other teenage Scouts with her who, independently of the Czech Scout organisation, decided to attend in their Scout uniforms) a political one?

The vast majority of the people on the social media channels that I frequent vociferously supported Lucie. When I posted the picture on an international Scouting Facebook group, it garnered more than 1,000 ‘likes’ within hours and comments that praised her for her bravery, suggesting that her actions were those of a good Scout. But there were others who weren’t so certain that she’d done the right thing. Some supported her personal action, but argued that, if Scouting is non-political, then she shouldn’t have attended the counter-demonstration in her Scout uniform.

Well, I’m with Lucie. I’m happy that the Scout Movement ‘per se’ is non-political in that it is not aligned to any specific political party and nor should it be. But Scouting is not (and never has been) simply about playing games, camping and discovering the outdoors for the sake of it, admirable though those activities might be. It is a worldwide educational movement that aims “to contribute to the development of young people in achieving their full physical, intellectual, emotional, social and spiritual potentials as individuals, as responsible citizens and as members of their local, national and international communities.”

That quotation is from the second paragraph of the World Constitution. In my mind if you are going to become a responsible citizen and a member of your community, then you learn to stand up for what’s right, to defend the rights of others and to take social action – whether that includes serving your local community by doing a “good turn”, getting involved in local, national or international development projects, or seeking to get your voice (or the voice of others) heard.

As my friend, the celebrated German journalist Tom Levine has written, “As a Scout, you can also not tolerate fascism, racism or xenophobia – and neither sexism, antisemitism or islamophobia, whatever your local populists preach. You have to stand up to those that threaten your neighbour, your colleague or your fellow Scout, or anyone else “of good will” – irrespective of whether you like them or know them well. You are to be a friend to those that are threatened. There is no choice. It’s a duty. Not an easy one. Not a photo-op.”

In my mind, being a good Scout is a highly political activity.

Scouts help others. Since BP founded the Movement, that has often meant standing up for the oppressed in the process of working for a more peaceful world. Whether that has been working with refugees and displaced people in the aftermath of the Second World War, supporting street children in the favellas of South American countries in the Sixties, or helping to educate young people about safe sex in the face of the AIDS pandemic in 1990s sub Saharan Africa, Scouting has engaged itself in the issues that impinge on the lives of its members. This year, World Scouting will publish resource materials to help its national organizations explore human rights issues with children and young people. These are all political actions.

So, how can we square the commitment of the Movement to be “non-political” with all of this?   I believe there need be no contradiction. The Movement itself is steadfastly non-political, but it does not want its members to be. It wants them to make decisions for themselves, to become engaged citizens and to live their Scout values – values that I define as integrity, respect, care, belief and cooperation.

Lucie was not representing Czech Scouting or the Scout Movement when she chose to attend a peaceful counter-demonstration. In living out her Promise, she was representing herself, but she chose to do so, with her friends, as a Scout.

And, I say, respect to her.