Plenty to eat in Hungary 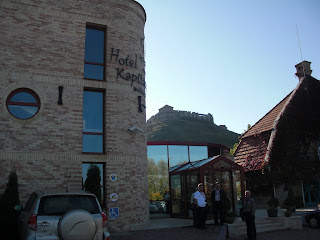 Terry Leahy must love Hungary. Wherever I looked this weekend, I could see either an enormous Tesco or a billboard telling me where the nearest enormous Tesco could be found. I was in Sümeg, in the westernmost county of the country, about an hour north of lake Balaton, for the annual gathering of the Friends of Scouting Europe.
It probably would have been faster to have flown to Vienna and to hire a car, but instead I travelled to Budapest, where I was met by a Hungarian Scouter who drove me to Sümeg, via a restaurant where I met up with the rest of the guests. Our evening meal on Friday set the scene for the whole weekend – far too much to eat (and if you wanted it, to drink), great conversation and slightly quirky entertainment; on this occasion, Hungarian Gypsy musicians, playing everything from folk tunes to hits from the shows on the violin and dulcimer. (Menu: ghoulash in a bread bowl, half a roast duck, two sorts of strudel)
The hotel, when we finally reached it, was wonderful. Towering above it was the medieval castle of Sümeg. The hotel itself is one of a growing number of spas in the country. It was quite full, so tourism seems to be alive and well in the country. 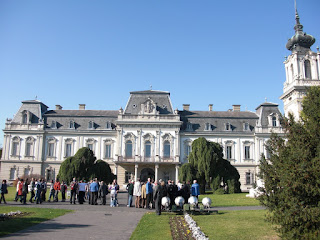 Saturday took us on a tour of Festetics Palace in the nearby town of Keszthely. The palace is stunning, with an extraordinary library, stocked with an exclectic selection of books from all over Europe – including, I noted, a study of Merino sheep and a guide to the railways of northern Britain. As a friend commented, this was the eighteenth century version of Wikipedia.
More food and a wine tasting at lunchtime, followed by a demonstration of horsemanship and whip cracking. There was the usual humiliation of audience participation. I was chosen to attempt 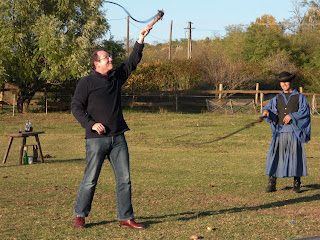 to crack the whip (and failed dismally).
A gala dinner followed the main business on the weekend – the annual meeting of the Friends. We heard how our donations were supporting small projects in central and eastern Europe, such as buying canoes for Scout Troops in Slovenia. I made a short speech, which seemed to be well received. 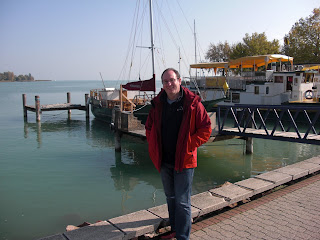 On the Sunday, we enjoyed a cruise (with brunch; more food) on Lake Balaton, before returning to Budapest by coach. A tremendous weekend – and a real chance to relax. Just what I needed after a couple of weeks of economic doom and gloom in London.