On my honour, I promise…. 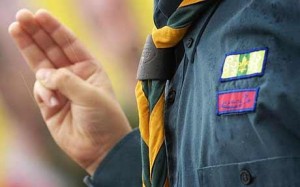 The UK Scouts have launched an historic consultation.   Amongst other things they are considering whether or not to introduce a version of the Scout Promise for those who feel uncomfortable promising to do their duty to (or in the case of very young children, to love) God, Allah or their Dharma, as doing so implies belief in a Supreme Being and the acceptance of Divine Guidance.   This consultation has been widely reported in the British press, including the Daily Mail, and deals with an area of concern that is possibly more contentious than opening up Scouting to girls (as the UK Association did in the 1970s) or being actively inclusive and supportive towards lesbian, gay, bisexual and transgender members (as happened in the UK in the late 1990s) – and both of these decisions led to resignations of leaders, much public excitement and general upheaval.

Why the rumpus?   Scouting worldwide has defined a number of core principles, in order to distinguish it from other sorts of youth work and to bind the international movement together.   These principles are included within the Constitution of the World Movement and the first  is ” Duty to God – Adherence to spiritual principles, loyalty to the religion that expresses them and acceptance of the duties resulting there-from ”    In the UK, that principle, described as ‘Duty to God’ has, until very recently been enshrined as a ‘Fundamental’ of Scouting.   The UK Trustees have agreed that the Fundamentals should now refer to a set of ‘values’ of Scouting, rather than a set of ‘principles’ – and that those values, (better able to be appreciated by the membership), should be “integrity, respect, care, belief and co-operation.”   “Belief” specifically refers to the exploration of “our faiths, beliefs and attitudes”.    So, the question is now being asked, if our fundamentals no longer specifically refer to a Supreme Being, should we not, as an inclusive organisation, open up our membership to those that have no faith?    Or is an acceptance of a Supreme Being so rooted within Scouting’s DNA that to do so would be inappropriate?

I love Scouting.  It has been part of my life (with a very short holiday from it when I was a sixth former) since I was ten years old.    It has provided me with experiences that have moulded my character and helped to determine my career.    I take the childlike, yet highly sophisticated, words of my Scout Promise (written to be understood by an eleven year old) very seriously.    The concept of ‘honour’ is one I strive to keep.   I really do try to ‘do my best’.    I think the idea of ‘duty’ is an important one.   I genuinely look for ways to ‘help other people’.   Those who know me well will understand that doing my duty to the Queen is, well, a bit of a ‘no-brainer’!   And, because I do have a belief (if not necessarily a very theologically developed one) in a Supreme Being, I have no problem in making my commitment to do my duty to God.

But, whilst that belief might have been typical of generations of young people, men and women in the 20th century, it is no longer true for the population of the United Kingdom in 2012.   The decline in religious observance is accelerating.   The proportion of people describing themselves as having no religion has risen, according to the 2011 Census, to 25 per cent of the population of England & Wales.    If Scouting is going to be a truly inclusive organisation, helping as many young people as possible to make sense of their world, to develop as individuals, to be empowered and to make a positive contribution to society, then, in my opinion, it has to make itself available and welcoming to those 25%, just as, nearly a century ago, it opened itself up to faiths other than Christianity.

Baden-Powell’s book, ‘Scouting for Boys’, published in instalments and read by eager Edwardian youngsters, was a book of its time.   It may have sold almost as many copies as the Bible in its heyday, but it is not a holy text.   Baden-Powell himself was clear that Scouting should move with the times.   He famously said that “”Scouting is a Movement, not an Organization”.   As a Christian, he wanted young people to espouse what he perhaps saw as Christian ideals – courtesy, charity, thrift and honour, courage, and cheerfulness – but he came to realise that these transcended any specific religion or faith.    Our society still values those ideals.   You only have to look at the way in which the United Kingdom revelled in demonstrating them in the summer of 2012 as we hosted the Olympic and Paralympic  Games to see that.   But they are the ideals of a good and just society, not limited to those of religious faith.

Whatever the results of the consultation, Scouting in the UK will, I am sure, continue to recognise the spiritual dimension within its programme.   I believe that young people should try to answer the question, “Why are we here?”  – and are often very, very keen to do so.  Through seeing dawn break at the top of a mountain, watching the glowing embers of a camp-fire,  taking part in service activities supporting the less fortunate, they are often drawn to consider their place within humanity and that consideration sometimes leads to an affirmation of faith or a growing awareness of the spiritual dimension of life.   Scouting should continue to draw out that spiritual dimension in its work and help its members draw their own conclusions – and it should direct young people to places of worship and religious teachers if that is what those young people want.   I believe that an atheist or agnostic leader will be able to do that just as well as an adult who has a faith.  I feel at no more of an advantage than that leader in supporting a young Muslim in helping her to find her own spiritual path; or in helping a young person of no apparent faith to ask the questions that will help them make sense of the world.

So, am I supportive of a version of the Promise that might allow someone of no faith to join me in Scouting?   Absolutely – as long as they respect my desire to make a Promise that includes direct reference to God.   Indeed, I recognise that we have countless leaders and young people already in the Movement who have made and continue to make their Promise with their fingers crossed at the point where duty to God is mentioned.   At last, they might be able to make a genuine and  public commitment to the values of Scouting without feeling hypocritical.

And if that means that the World Organization of the Scout Movement might have to rethink the wording of its Constitution a little, then so be it.    Constitutions can be rewritten.   The life chances of young people and the adults who guide them cannot.