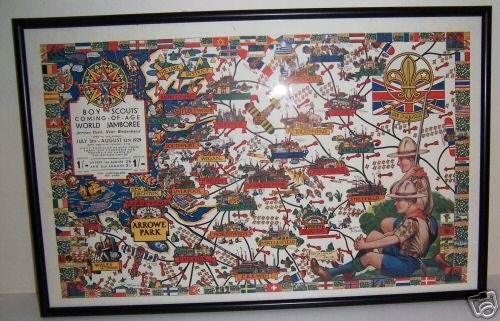 The story of the golden arrow

Anyone involved in Scouting will tell you that it’s an organisation that puts great store by its history. I’m proud to have played a small part in a particularly special chapter.

The story starts at the 3rd World Scout Jamboree, held at Arrowe Park, Merseyside in the United Kingdom, ninety years ago in 1929. 30,000 young people came together for ten days of activity. The Prince of Wales attended and stayed overnight – in a tent. During his visit he bestowed a peerage on Scouting’s founder – and Robert Baden-Powell became Lord Baden-Powell of Gilwell.

There’s some film footage of the Jamboree here. The film shows the farewell ceremony on the last day, the 12th August. The ceremony consisted of a march with flags and banners past the royal box with the Chief Scout and other officers, ending in a Wheel of Friendship formed by the Scouts, with 21 spokes symbolising the 21 years since Scouting had been founded.

The images are a bit grainy, but it doesn’t look so different from the Jamborees that I’ve attended over the years – or indeed the one at which I will be volunteering this summer in West Virginia, jointly organised by the Scouts of Mexico, Canada and the USA, where (as it happens) I will support the team organising the various ceremonies.

While burying a hatchet in a cask of gilded wooden arrows, Baden-Powell addressed the gathered Scouts.

“Here is the hatchet of war, of enmity, of bad feeling, which I now bury in Arrowe. From all corners of the world you came to the call of brotherhood and to Arrowe. Now I send you forth to your homelands bearing the sign of peace, good-will and fellowship to all your fellow men. From now on in Scouting the symbol of peace and goodwill is a golden arrow. Carry that arrow on and on, so that all may know of the brotherhood of men.”

Then he sent the golden arrows as peace symbols to the North, South, West, and East, through the spokes of the Wheel of Friendship.

“I want you all to go back from here to your countries in different parts of the world with a new idea in your minds of having brothers in every country… Go forth from here as ambassadors of goodwill and friendship. Every one of you Scouts, no matter how young or small, can spread a good word about this country and those whom you have met here.

“Try to make yourselves better Scouts than ever; try to help other boys, especially the poorer boys, to be happy, healthy, and helpful citizens like yourselves.

“And now, farewell, goodbye. God Bless you all.”

No-one knows quite how many arrows there were in the casket, but each was made of wood and painted gold. It could be that there were 51, the number of nations represented at the Jamboree. Certainly, many went home with individual national contingents.

One arrow went home with a Troop to Poland.

In the early part of the Second World War a Polish soldier was taken prisoner in his own country and managed to escape. He was a Scout, and had been the one to receive the golden arrow from the hands of the Baden-Powell at the Jamboree at Arrowe Park. He had lost everything – home, family, and all that he held most dear – except one precious possession – the golden arrow, in cheap wood, which he was determined to take away with him.

After passing through many adventures he reached Great Britain. Nothing arrived except one brave worn-out Polish soldier and his golden arrow.

He sought out a Scout whom he knew, and by whom he had been taught his Scouting in the old days at Gilwell Park. He gave him the arrow, saying that for the present it was no longer of any use to him. He had brought it to the only haven he knew.

Back home in Poland, of course, everything changed. By 1945, Warsaw had virtually been razed to the ground after the Uprising, where brave young Scouts had played an essential role in the resistance movement, ferrying messages backwards and forwards through the sewers and passages cut through the rubble of the city under seige – later to be commemorated by the statue of the “little partisan” that stands in the centre of modern Warsaw today.

No-one knows what happened to the Polish soldier who had ended up in the United Kingdom, but the arrow was afterwards given into the safe keeping of small, country Scout Troop, who looked upon it with great pride.

Meanwhile, Poland had become a satellite state of the Soviet Union. Many Scouts went into exile. The established Scout movement there was adopted by the Soviets and re-purposed for propaganda and a very different set of educational objectives than those that Baden-Powell had envisaged. It kept its name, ZHP, Zwi?zek Harcerstwa Polskiego (in honour, at least in part, of the role that Scouts had played during the war), but it was no longer, at least in the eyes of World Scouting, a Scout organisation. The World Organization of the Scout Movement ceased to recognise it as a member association.

But the Scout Leader of the Troop in the British countryside continued to look after the little golden arrow. Some day, when the cold war was over and peace had truly come to Europe, he hoped that the Arrow would go back to Poland.

In 1989, communism fell in Poland. Very quickly, Scouting (in a form acceptable to the World Organization) began again – and those in what had been the communist youth organisation made contact with exiled Scouts and the World Scout Committee.

After much negotiation and diplomacy, the Polish Scout organisation, ZHP, was readmitted to World Scouting in 1996

That same year, the British and Polish Scouts held a joint set of events in Poland, culminating in a large celebratory camp in Warsaw. The Brits called this “Polish Partners” – The Poles called it “British Brothers”.

At the time, I was the UK Scout’s International Commissioner. I was contacted by the son of the Scout Leader who had looked after the golden arrow. (I am embarrassed to say that I have no record of their name, or the name of their Scout Leader dad. If anyone knows them, I would love to set the record straight by recording them here.) Would I be willing to take the arrow with me to Warsaw and to present it to the newly appointed Polish International Commissioner?

Of course I would.

ZHP’s archivist takes up the story on their website (translated from the original Polish.)

‘The central event began on August 6 at the Scout Centre at Czerniakowcy in Warsaw. In the evening, during the roll call in the presence of all participants of the rally, two flags were pulled on the mast. The ceremony was attended by invited guests, among them the names of a not insignificant rank: the head of ZHP hm. Ryszard Pac?awski, prof. Jerzy Wiatr – Minister of National Education, representative of the British embassy Alistair Harrison and John May, international commissioner of The Scout Association. The latter said during his speech: “Because of what you are doing now and in the last ten days, you are implementing the dreams of Lord Baden-Powell, the founder of the Scout movement, to live in friendship and peace.”

‘On 8 August, after the morning rally in Warsaw, there was a ceremonial final gathering. It was at this ceremony that British international commissioner John May gave the ZHP international commissioner, Piotr Borys, the Golden Arrow. The same Arrow, which in 1929 Lord Robert Baden-Powell handed to the Polish delegation at the 3rd World Jamboree in Arrowe Park. And the same one that during the war went back to England to be kept there until she could safely return to Poland. Finally, the moment has come – this time when it was thought that it should come back. “Now that Poland has regained membership in world scouting organisations, this symbol has returned home,” said John May.’

That is what Scouting does for people. That is the spirit of Scouting. 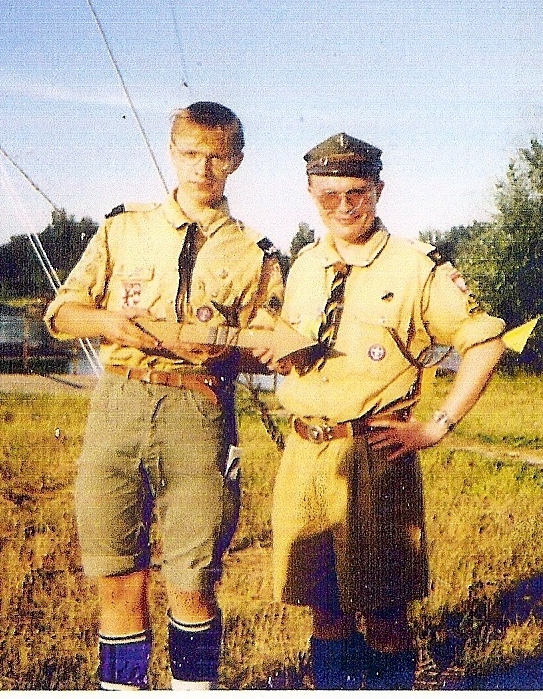 In this article, I have drawn on, paraphrased and partially quoted some of Marguerite de Beaumont’s words from her 1944 biography of Baden-Powell, “The wolf who never sleeps”. It is she who first told the story of the early parts of the Polish golden arrow’s journey.