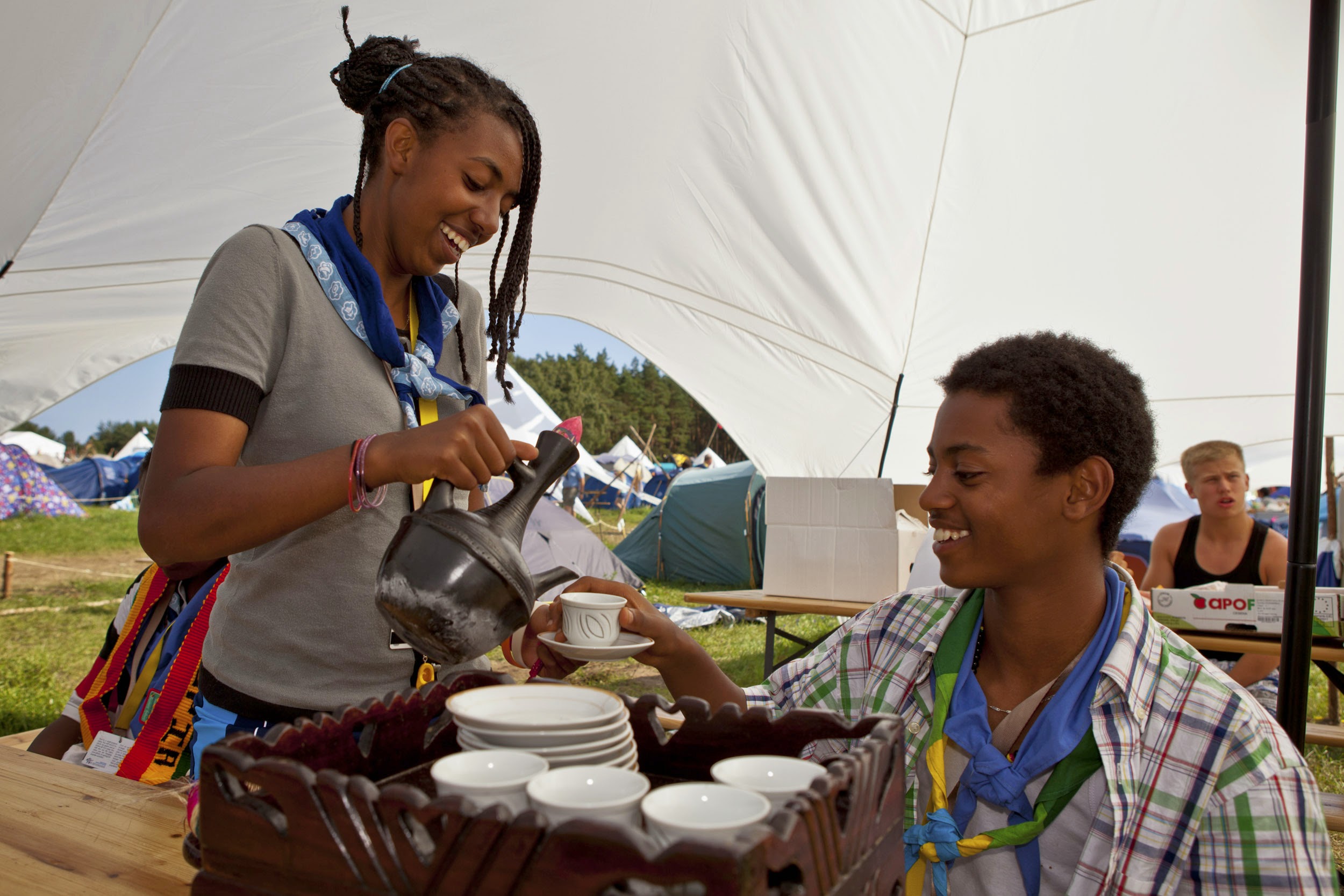 Breaking the ice at the World Scout Jamboree

Waiting for the participants at this year’s World Scout Jamboree in West Virginia, USA, will be 40,000 new friends that they haven’t yet met.   If you’re one of them, reaching beyond your own Troop / Unit for the first time and actually beginning to forge those friendships can feel a bit daunting.   What do you say to someone you’ve never met before?  How do you avoid making a cultural “faux-pas”?  What if they ignore you?

I asked some previous Jamboree participants for a few tips.   These are all ‘blinding glimpses of the obvious’ really, but everyone I asked said they wished someone had suggested them before their Jamboree experience, so be patient with me.   You may have some of your own you’d like to add in the comments below this post…

1   Scouts like badges / patches.   Swapping badges is a great way to start a conversation.  You can look at a badge and so you don’t have to look the other person in the eye which is sometimes hard to do.   Explaining the reasoning behind why your badge has a picture of a bear in a bowler hat drinking tea (!) is a great way to break the ice.   (Remember, at the World Scout Jamboree, as a participant, you should only swap badges with other young people.  If you are approached by an adult to swap, or are offered money for a badge, please tell your Leader.  This is strictly against the Jamboree Code of Conduct.)

2   Arrive at an activity early. When you arrive early, there will be fewer people present. This will make approaching people less intimidating, since there is more of a one-on-one interaction. Plus, you could meet someone who is extroverted and can introduce you to more people as they arrive, so just follow their lead if that happens!

3   Wander round with a friend.  You shouldn’t always hang out with the person you know, but particularly at the beginning of the Jamboree, it can help to break the ice. Inviting other people into your conversation could help get the ball rolling for other conversations and introductions, where you could eventually split away from your friend and meet new people.   And so could your friend.

4   Be approachable.  No one wants to talk to a person standing with their arms crossed or looking like they don’t want to talk to someone. If this is how you stand when you’re uncomfortable, then take off your day-pack and hold it.  This will give you something to do with your arms and help you look more approachable.  No, really, this works.

5  Find someone else who is alone (or just standing around with one friend) to start your first conversation. It is much easier to strike up a conversation with one or two people than it is to start talking to a whole Patrol. It is much less intimidating for you and the others will very likely be delighted someone included them. Think of it as you helping the other person feel more comfortable because they are now not alone. Chances are they are feeling very similar to you and are pretty nervous! If you go in with the mindset that you are helping them by talking to them, it will help ease your nerves a bit.

6   Prepare some open-ended questions.  You know what it’s like.  If you can answer a question with just a ‘yes’ or a ‘no’, then you will.   If you actually have to formulate whole sentences, then you end up having a real conversation.  Well, the people you’re taling to are just the same as you.   You can probably think up some better ones, but some great conversation openers that have been suggested to me (which are pretty low-risk in terms of answers) are:

7   Be ready to listen.   Once you’ve asked the open-ended question, actually listen to the answer.   It’ll open up the opportunity to ask other questions and help you truly get to know the person who’s having a conversation with you.

8   Take a selfie.   And then complain about the speed of the wi-fi as you both try to upload the picture to Instagram.  (PS.  Other social media sites are available.)

9   Offer tea.   If you’re a British participant, everyone will expect you to love tea and for it to be permanently on tap at your Unit campsite.   Even if, actually, you’re really a double-shot macchiato type person.

And, on that matter of making a cultural “faux-pas”…   Relax.  People are very forgiving.   My personal advice is that you should avoid making any assumptions and follow the lead of the person you’re talking to.  For instance, many Scouts from Islamic countries don’t shake hands with their left hand, as Scouts in other countries do.   But this isn’t a hard and fast rule.   Be ready not to give offence – and people will recognise your generosity of spirit.  Because that’s part of being a Scout, isn’t it?!